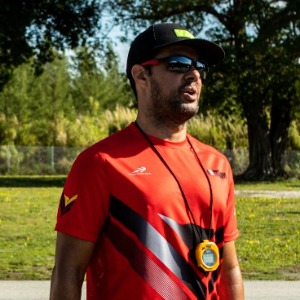 San Palma CMTeam Consulting
Have a Question? - Contact Me Contact Me
Coach Summary Meet Your Coach Contact
Coach Summary
Refund Policy
Plans are protected by our Refund Policy and may, with the author's approval, be exchanged for a plan of equal value from the same author.
Location

San has been a coach for over 20y. He has been coaching the Pro triathlete Carla Moreno, who won several different distance races around the world.
San also coaches many athletes at all levels of ability in more than 25 countries & in all 5 continents, national head coach (BRA) in many competitions such as ITU World Cups in 4 continents, PanAmerican Games (Rio 2007), IM WC & IM 70.3 WC. During the 2010 Budapest and 2011 Beijing ITU Triathlon WC he was the national head coach (age group & elite).

San has been a running/triathlon coach for over 20 years, 26 years as an athlete.

He is also the co-founder of CM Team, a company that provides and guides personalized training programs to enhance athletes performance.

San Palma also coaches Brazilian and international athletes at all levels of ability in more than 25 countries and in all 5 continents.