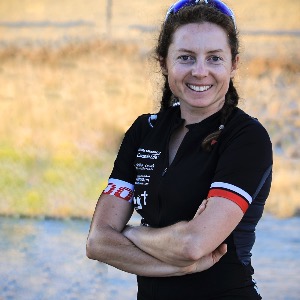 Christine Waitz
Have a Question? - Contact Me Contact Me
Coach Summary Meet Your Coach Contact
Coach Summary
Refund Policy
Plans are protected by our Refund Policy and may, with the author's approval, be exchanged for a plan of equal value from the same author.
Location

Christine Waitz is a two time Ironman Age Group World Champion and a German Long Distance National Champion who's got almost 20 years of endurance sports experience. Based in Roth, Germany, she specialises in triathlon and endurance sport coaching as well as technique training in swimming, road bike, mountain bike and running. Christine speaks German and English.

I started doing triathlon when I was 13 years-old. Being born at Roth it’s probably no wonder I chose triathlon. Looking back, it has been the starting point of almost 20 years of passion for endurance sports.

Why? Triathlon is fascinating. In many ways. Testing personal limits, during ones daily training - and taking it to the extreme at a race. Triathlon is intoxicating. You can thereof convince yourself every July at Roth. Triathlon unites. During a race every athlete fights for himself. During a race - and solely there. Outside the competition triathlon unites. Not only athletes, but also volunteers, fans, locals.
Almost twenty years of sports gave me uncountable friendships around the world. I’m thankful for all of those experiences. That’s why my goal is not only to help an athlete to find the best version of themselves but also to convey the fascination of endurance sports and everything connected to it.

To my biggest success I count two Age Group World Championship titles, two 5th ranks as a Professional triathlete (Challenge Roth & Ironman Malaysia), a German national Title, a 2nd rank at the 24h-Mountainbike World Champs. As well as a 2nd place at Race around Ireland and a team-record time at the legendary Race Across America.
I studied arts and teaching and work as coach and journalist. I trained with Brett Sutton for 3 years during the time I was a professional triathlete.
I'm a licensed triathlon coach (DTU C and B-Trainer) and licensed Mountainbike coach.