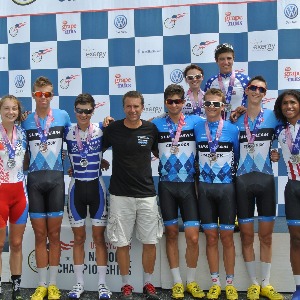 Coach Summary Coach Package Pricing Contact
Coach Summary
Refund Policy
Plans are protected by our Refund Policy and may, with the author's approval, be exchanged for a plan of equal value from the same author.
Level 2 Coach

~Full-time cycling coach since 1999.
~Served as director for Slipstream Sports (Garmin-Sharp, but now EF-Education First) directing the development team.
~coached riders to over 100 national championship podiums (we've stopped counting) and over 20 gold medals there.
~ I've coached 15 riders to compete at the world championships, including a podium performance there.
~www.WilliamsRacingAcademy.com
~check out our podcast, The Second Echelon
~married over 20 years, 3 kids

I am a full time cycling coach since 1999. I also spent a few years as a director for Slipstream Sports (Garmin-Sharp, but now EF-Education First) directing the development team. We also spend 3-4 months per year living in Belgium and Italy to help athletes develop to the elite level and otherwise get that racing and living experience that can only be had in the heartland of bicycle racing. We do this for athletes who aren't part of the national team or national program, because we believe everyone deserves the opportunity to become the best that they can be.

I've coached riders to over 100 national championship podiums (we've stopped counting) and over 20 gold medals there. I've coached 15 rider to world championships, including a podium performance there. I've had riders represent USA at the World Championships for the last eight years. This is from someone who isn't currently on USAC staff, and I'm not a former pro.

I've been head coach at camps in Mallorca, Italy, Belgium, and in the US. I've been coach and head coach for the USAC Talent ID Camp. To show we aren't a one trick coaching operation, I've coached riders to the national team on the track, road, cross, and mountain bike. I've directed for Team USA at the Pan Am games for road and track. I've coached more than 20 riders to the US National team.

I am 50 years old, and I'm still training and racing.

Coach Package Pricing
*You will only be charged the $99 startup fee today. Monthly billing will begin after TrainingPeaks connects you with your coach.
Individual Services
View Training Plans
Have a question? Contact me.