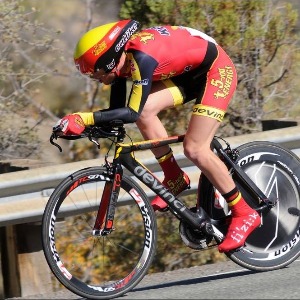 Christian Parrett Kinetic Potential Coaching
Have a Question? - Contact Me Contact Me
Coach Summary Meet Your Coach Training Plans Contact
Coach Summary
Refund Policy
Plans are protected by our Refund Policy and may, with the author's approval, be exchanged for a plan of equal value from the same author.
Location

I'm a former pro cyclist and now the head coach at Kinetic Potential Coaching. At KPC we offer coaching services and training camps for all levels of cyclists. I'm happy to say we coach people ranging from non-racers all the way to up-and-coming Junior National Team riders. As a coach I'm a firm believer that my job isn't just writing a training plan. For this reason, I advocate a high level of communication between athlete and coach.

After dabbling in other sports as a youngster, I took up cycling in my late teens. I quickly found myself on the podium of the National Championships with riders like Taylor Phinney and Ben King. This led to several years in the USA Cycling National Team, and after that, several years racing professionally in Europe and the USA.

I've always been an analytical person and learned as much as I could under the fantastic coaches I was lucky to work with. I found myself studying power files and reading exercise physiology papers for fun, and began coaching friends of mine for fun. Pleased with the success they found, often after many years of stagnation, I began to consider coaching as a career.

Enter my good friend and former teammate, Bobby Sweeting. Bobby ran Kinetic Potential Coaching and brought me on board to begin helping out. At KPC, our view is that amateur athletes should be getting coached by former racers with deep experience in the sport. Why? Well, at the ProTour level of the sport, riders have directors, trainers, nutritionists-all doing one specific job Drop down a level or two though, and riders need that same level of guidance from one person: their coach. Making a rider strong is one thing, but he or she is still going to get dropped from a crit if they haven't been taught how to ride one. For this reason, one of the things you'll hear me repeat often is "be a smart monster." That's what we make-smart monsters.