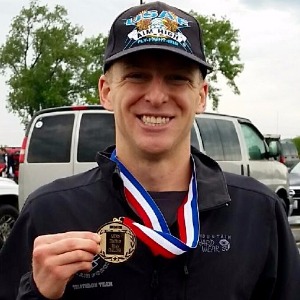 Carl Eichert
Have a Question? - Contact Me Contact Me
Coach Summary Meet Your Coach Contact
Coach Summary
Refund Policy
Plans are protected by our Refund Policy and may, with the author's approval, be exchanged for a plan of equal value from the same author.
Location

Sport Types
Services
Athlete Requirements
I have no athlete requirements. A heart rate monitor and power meter are preferred if online coaching.
Meet Your Coach

I am a United States Air Force officer and my profession is in nuclear engineering, I love working with numbers and data, and it directly correlates to my data analysis in triathlon. I am an ASCA (swimming) and USAT (triathlon) coach.

I am not associated with a particular company or brand, but I coach in person, online, and do video analyses.

My primary background is swimming and am a ASCA Level 2 coach as well as USAT Level 1 coach. I grew up swimming when I was seven years old, soccer before that, track in high school, and triathlon in college. I've created many triathletes from swimmers, have coached a USA Swimming National Championship swimmer and multiple teams, and have introduced many runners to swimming.

By stating my racing and coaching accomplishments, I hope to show that I take a scientific approach and use this experience to test and evaluate training and racing ideas on myself before I advise my athletes. I started a complete beginner just like all of us once did and strove year after year to make myself the best I could be. Now that I've seen triathlon from many levels and race distances, I am confident in coaching athletes from many different backgrounds.