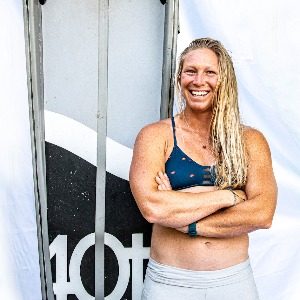 April Zilg The Athlete Agenda
Have a Question? - Contact Me Contact Me
Coach Summary Meet Your Coach Training Plans Contact
Coach Summary
Refund Policy
Plans are protected by our Refund Policy and may, with the author's approval, be exchanged for a plan of equal value from the same author.
Location

Sport Types
Services
Athlete Requirements
I work with PADDLE athletes and only accept clients with a Garmin (or equivalent sports watch) and a chest-strap heart rate monitor.
Meet Your Coach

April Zilg is a gold medalist in the Pan American Surfing Games, 2x Carolina Cup Graveyard Champion, Gorge Downwind OC1 Champion and APP World Tour Vice World Champion. After training and competing for the better part of the last decade, all of her hard work learning how to train and properly fuel finally paid off and now she wishes to share all she's learned on her route to success as Founder of the Athlete Agenda.

Believe it or not, April Zilg didn’t grow up an athlete; in fact, she was quite the opposite. While in graduate school working on her Master’s, she realized she was spending too much time behind a desk and decided it wasn’t where she wanted to end up for the rest of her life.
Thankfully, she discovered a sport that allowed her to be outdoors and on the water that she fell in love with at first try: stand-up paddleboarding. With time, her love for SUPing grew which led her to make better healthy lifestyle choices and evolve into a competitive athlete.
Today, April is still a competitive athlete on the world SUP tour, a member of Team USA for SUP and Va'a, and a balanced entrepreneur to keep her dream alive.