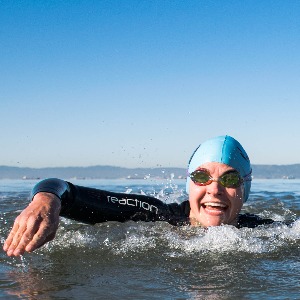 KJ Kroetch All Terrain Endurance
Have a Question? - Contact Me Contact Me
Coach Summary Meet Your Coach Training Plans Contact
Coach Summary
Refund Policy
Plans are protected by our Refund Policy and may, with the author's approval, be exchanged for a plan of equal value from the same author.
Location

Sport Types
Services
Athlete Requirements
Everyone who is willing to try is an athlete - all are welcome. No gear, no problem.
Meet Your Coach

All Terrain Endurance is about seizing opportunities to take whichever trail lies before you. The endurance sport world is a wide-open playground, with ample occasions to utilize fitness. Whether you dream of completing a 5km running event, racing an ultra-distance triathlon, or hurtling down and clambering up mountains, your fitness should allow you to achieve your goals while also enjoying all that life has to offer - across all sorts of terrain.

KJ grew up swimming in the San Francisco East Bay. After swimming only during her summers, she was recruited to swim for Tufts University in Massachusetts. It was during those summers spent with her "rec" team that she discovered her love for coaching, as a member of the coaching staff and ultimately the head coach of a youth swim team.
After starting and finishing a professional career in construction management, KJ is now again a full-time coach of youth and Masters swimming as well as triathlon.

Preferred Athlete Levels
Beginner, Intermediate, Advanced
Training Plans
Showing 3 of 3 plans View all plans
Plan Level Guarantee
Plans are protected by our Refund Policy and may, with the author’s approval, be exchanged for a plan of equal value from the same author.
View all plans
Have a question? Contact me.