In 2009, Venezuelan Gilbert DuCournau left his home to come to the US to pursue his dream of becoming a professional bike racer. His coach Hunter Allen has worked with him using the tools of WKO to help him reach that goal.

Coaching an athlete from the time they start seriously cycling to the time they have become one of the best riders in the country has not only been incredibly satisfying, but also educational. I started working with Gilbert DuCournau when he came to spend the summer with me in 2009 when he was only 16. Not only did he come to spend the summer in Virginia, but also he came all the way from his home country of Venezuela all by himself.

Over the seven years that I have coached him, he has changed in many ways as a person and as a cyclist. As a relatively new cyclist, he came from the world of soccer so he was fit, but he did not have any of the cycling skills needed to compete. Those skills were some of the first things we had to work on in order to get him up to speed with learning how to successfully handle a bicycle. From a development schedule, everything was a weakness. He didn’t have a sprint, couldn’t really climb, and didn’t have much endurance. We honestly had no idea if he could even become a good cyclist. He was raw material at the beginning for certain.

The first year of data started out with his Functional Threshold Power (FTP) at 230 watts and he didn’t have much differentiation between his abilities, which is very normal for new cyclists. It takes time (years) for an endurance athlete to cut away the fat so to speak and get to the bone and see the real strengths and weaknesses. Many cyclists have started out thinking they are a sprinter, only to discover they are a climber or all-arounder after five years of serious training.

In the WKO4 software, not having any one strength or weakness will show that your phenotype is “All-Arounder”. An “All-arounder” means both that you are great in everything and at the same time not so great in everything. In Figure 1, you see Gilbert’s Power Profile showing that he is relatively the same across the four time periods in the Power Profile, but definitely lacking in one minute power. It’s really hard to say that it can be a weakness at this point in the training, as he still has plenty of developing to do from a junior rider the age of 16. 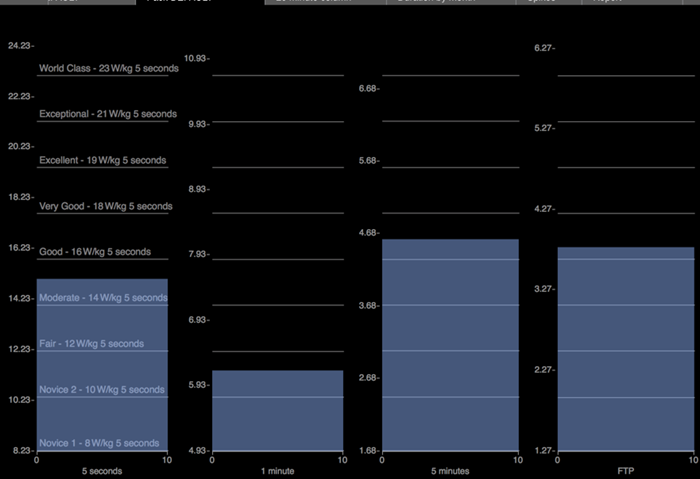 The second year, 2010, Gilbert began to develop a little more as a cyclist and all of his numbers improved that year, including a significant rise in the one minute test, which made it equal to the other efforts, so that he looked even more like an “all-arounder”. However, instead of everything being a weakness, he was now starting to be good and very good. It is possible that with his sprint wattage lagging behind in the upper “moderate” range that his strength could possibly lie within more steady state or longer sustained efforts like climbing or stage races. 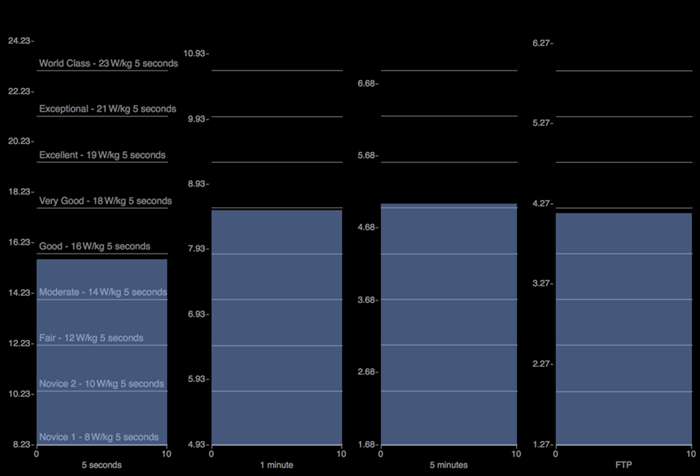 2011 was a maintenance year since it was his first year in college and he was learning to manage his time between studies and cycling. 2012 though began to give us the first glimpse into his true phenotype as his 5 minute and FTP columns really start to rise above the 1 minute and 5 second columns. This confirms earlier suspicions that he would be better suited to steady state type efforts.

His phenotype changes to more of a “TTer” now than an “All-arounder”. TT’er is kind of of a misnomer as it’s really a “steady state rider”, someone that is good at long steady state efforts like time trialing, climbing, and stage racing. It is exciting to see the 5 minute time range rising above the FTP column, as this is a sure indicator of more potential to improve the FTP. 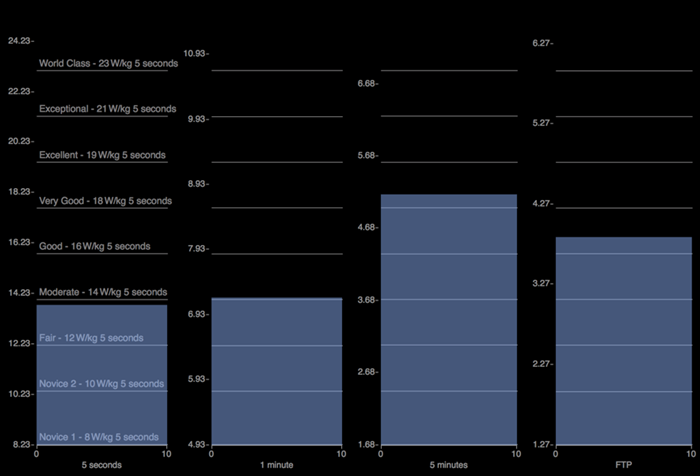 We skip ahead another year as 2013 was largely a wash from a broken bone and couple of surgeries from a bad wreck. 2014 is our next year of improvement and we see the FTP column improving, along with the one minute and five second columns! I have seen this many times before and when an athlete makes a nice increase in FTP, everything else comes with it- even their sprint. 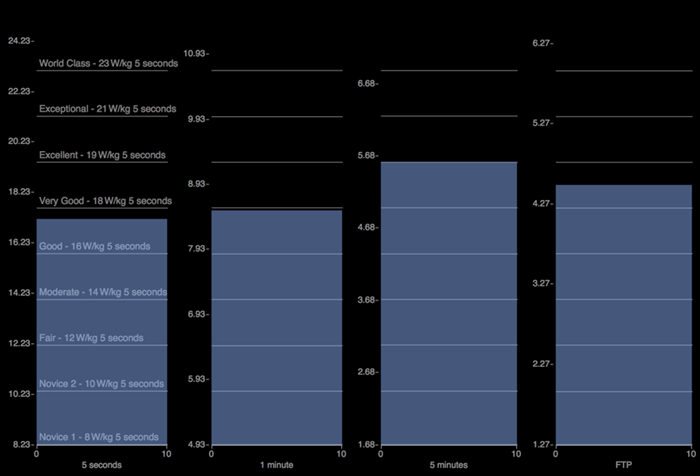 This brings us to 2015, which mimics the same exact shape as 2012, but much bigger numbers now. Some of this improvement is the result of losing more body fat and his body maturing even more. He has now completed two major 10-day stage races and these definitely contribute to the overall increase in numbers. There is nothing like racing in very hard 10-day stage races to make you a better athlete. Contributing to the overall improvement in 2015 was the fact that he has now graduated college and is focusing solely on cycling. It is amazing how high you can raise your FTP when all you have to do is train and recover. 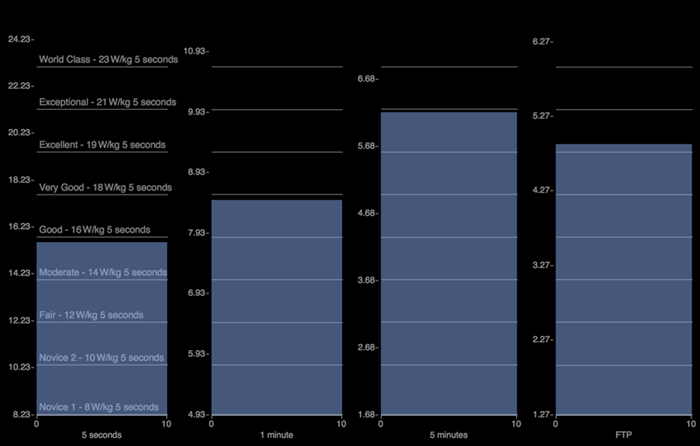 One thing that is also very important to understand is Gilbert’s ability to handle more and more training stress over the years. Cycling is an endurance sport in every sense of the word and no better demonstrated by the fact that after six years of training, he has raised his watts per kilogram ratio at FTP to that of a continental professional. In Figure 6, you can see that his Training Stress Score (TSS) per year has steadily increased each year and this year he already has 37,241 TSS even though it’s the middle of August! 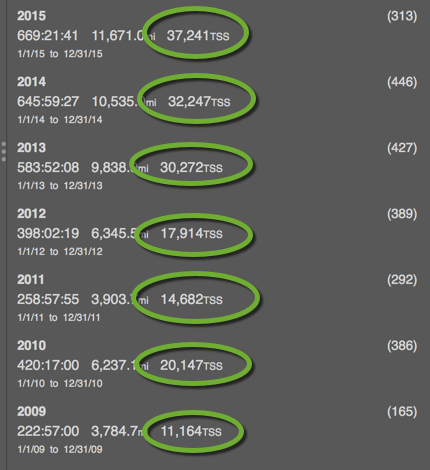 An interesting report in WKO4 that helps you to identify the changes in phenotype over the years is the Phenotype report. This is a simple report that displays the phenotype for each year that you were/are and demonstrates the ability of athletes to change phenotypes throughout their career. In Gilbert’s case, even though he has matured as a rider and we’ve seen some smaller differences, he has moved between All-arounder and TT’er for his seven year career so far and this demonstrates that depending on the type of training he is doing and his maturation as a cyclist.

This improvement throughout all the energy systems is something that takes years and years of training and hard work. In our final figure we see Gilbert’s initial Power Duration Curve from 2009 and his Power Duration Curve this year. Now those are the results we look for. 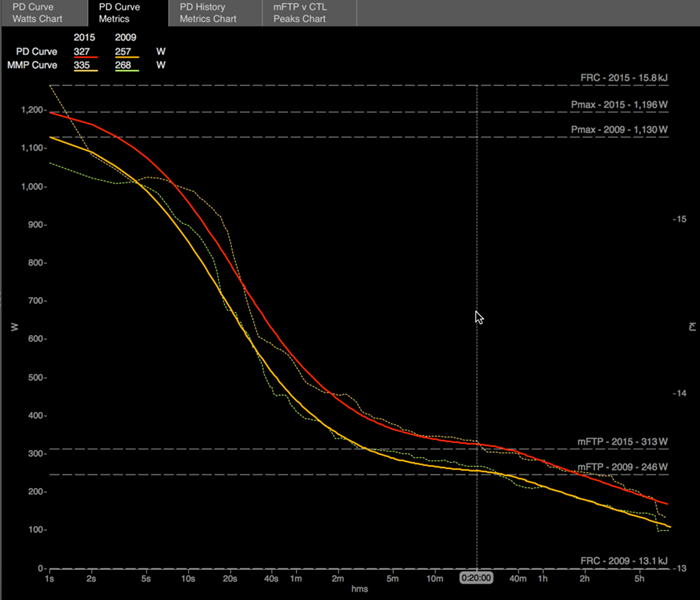 In conclusion, it’s very rare that a coach gets to work with an athlete for over six years and even more rare to start with that athlete as a junior.  To be able to watch and understand the changes that Gilbert has made in his fitness over the years has been exciting and enlightening. The largest change of course has been that he has increased his FTP from 2.8 watts per kilogram to 5.6 watts per kilogram in that time period, and his ability to repeat that new higher FTP day in and day out during a 10-day stage race.

About Hunter Allen
Hunter is a USA Cycling Level 1 coach and former professional cyclist. He is the co-author of 'Training and Racing with a Power Meter', co-developer of TrainingPeaks WKO+ Software, and is the CEO and Founder of the Peaks Coaching Group. He specializes in coaching cyclists with power meters and is on the forefront of coaching with cycling's newest tool. You can contact Hunter directly at www.PeaksCoachingGroup.com.
Visit Hunter Allen's Coach Profile
#CYCLING