What Kind of Carbohydrates To Eat During Your Race: Liquids Vs. Solids

"During exercise, liquid foods always digest better than solid foods." At least, that’s what it seems everyone is saying these days. Ben Greenfield digs deeper into this claim. 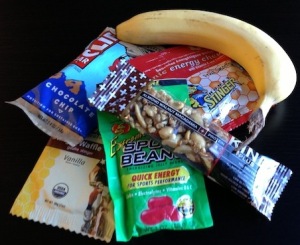 At least, that’s what it seems everyone is saying these days. So we’ve all heard somewhere that when the going gets tough in a workout or race, liquids beat solids hands down, right?

To see if this is true, let’s break down a March 2010 study in the Journal of Medicine and Science in Sports & Exercise, entitled “Oxidation of Solid versus Liquid Carbohydrate Sources”. Here’s how the intro reads:

“The ingestion of carbohydrate (CHO) solutions has been shown to increase CHO oxidation and improve endurance performance. However, the majority of studies have investigated CHO in solution and sporting practice includes ingestion of CHO in solid (e.g. energy bars) as well as liquid form. It remains unknown whether CHO in solid form is as effectively oxidized as compared to CHO solutions.”

So the researchers then went on to study cyclists who worked out for a 3-hour aerobic cycling session. Here is what they found:

“The present study demonstrates that a GLU+FRC (glucose + fructose) mix administered as a solid BAR during cycling can lead to high mean and peak exogenous CHO (carbohydrate) oxidation rates (>1g/min). The GLU+FRC mix ingested in form of a solid BAR resulted in similar average and peak exogenous CHO oxidation rates and showed similar oxidation efficiencies as a DRINK. These findings suggest that CHO from a solid BAR is effectively oxidized during exercise and can be a practical form of supplementation alongside other forms of CHO.”

Short and sweet summary: The solid bars did just as well as the liquids. At least for cyclists.

What about gels vs. drinks?

This study demonstrates that a GLU+FRC mixture is oxidized to the same degree when administered as either semi-solid GEL or liquid DRINK, leading to similarly high peak oxidation rates and oxidation efficiencies.

Short and sweet summary: the gels did just as well as the liquids too. At least for cyclists.

So while we’ve established that when you’re doing non-jarring, non-impact, non-weight bearing exercise like cycling, you can chomp away on energy bars or a handful of trail mix if you don’t feel like drinking energy drinks or slamming gels…

I dug in, but couldn’t find a study specifically on runners (leave your comment below if you happen to find one on runners). However, I did find one on triathletes.

Scientists at University of Utrecht in the Netherlands compared liquid versus solid carbohydrate intake before and during prolonged exercise in 32 triathletes who were training for anything at or above the level of a sprint triathlon. Study participants took part in hard workouts that consisted of two bouts of cycling lasting 45-50 minutes at about 75% VO2max (85% of maximum heart rate) and two running workouts lasting 45 minutes, also at 75% VO2max.

So first, the triathlete cycled, and then they ran. Then after a 6 minute rest, they completed a maximal cycling test consisting of three minutes of pedaling at 175 Watts and then three minutes of 100% all-out intensity. Oh, and these poor folks weren’t done yet.

If you were doing the math, that is over three hours of exercise with an average heart rate at or above 85% of maximum heart rate. As if that weren’t enough, each participant had to do this three times through at different times, each time with a different fueling scenario: once with caloric liquids only, once with a mix of liquids (white bread, marmalade and bananas – yummy), and once with a non-caloric liquid placebo that was basically just food coloring. Water intake was the same between all groups.

So which treatment was best?

Half of the triathletes in the study were able to complete all three hours of hard exercise when they took in liquids only, but just nine of the triathletes could handle the same workout once solids were added in. And even the ones who didn’t finish the workout weren’t able to go as hard for the part of the workout that they did actually complete.

In other words, liquids beat solids hands down once running was introduced in a study like this.

So here’s your take away message: Solids are just as good as liquids when you’re riding a bike, but once you start jarring the body and sloshing the stomach, try to stick to liquids (and I would actually consider a gel just as good as liquid, although I’m not aware of any studies that investigate gels vs. liquids in runners).

I’m personally a liquids on the downtube of the bike, liquids in a handheld flask on the run kind of guy, but I’m curious what your personal solids vs. liquids fueling strategy is. Leave your questions, comments and feedback below!

About Ben Greenfield
TrainingPeaks contributor Ben Greenfield, M.S. PE, NSCA-CPT, CSCS, is recognized as one of the top fitness, triathlon, nutrition and metabolism experts in the nation. For more information on coaching and training with Ben,'check out his blog/podcasts,'follow him on Twitter, or'visit his Facebook page.
#RACE-DAY-NUTRITION