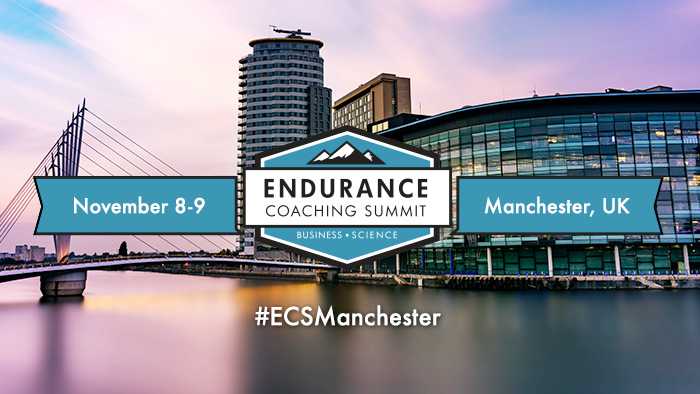 TrainingPeaks Brings the Endurance Coaching Summit to the U.K.

Registration has opened for the 2018 ECS Manchester, which will be held November 8 – 9, 2018 in partnership with British Cycling and British Triathlon and headlined by IRONMAN® legend Chrissie Wellington.

We are excited to announce that the TrainingPeaks 2018 Endurance Coaching Summit (ECS) will be held in Manchester, U.K. November 8 – 9, 2018. Located in one of the top sporting cities in the world, ECS Manchester will give attendees access to state-of-the-art conference, training and testing facilities in partnership with Etihad Stadium and the Manchester Institute of Health and Performance.

In addition to having access to some of the world’s best high performance facilities, attendees will also have the opportunity to network with some of the industry’s best coaches, brands and thought leaders. “The Endurance Coaching Summit has continued to evolve to meet the needs of endurance coaching across sport disciplines,” said Dirk Friel, Co-Founder, Chief of Fitness Brands at TrainingPeaks. “For us, taking our conference overseas was the next logical step as we see the continued need for coaching education and networking opportunities around the world.”

This year’s keynote speaker, Chrissie Wellington, is an Officer of the Order of the British Empire and a four-time IRONMAN world champion. Since her retirement from professional racing in 2012, Wellington has authored two best-selling books and focused heavily on philanthropic efforts for charities including the Challenged Athletes Foundation and the Blazeman Foundation for ALS. She is currently the Global Lead for Health & Wellbeing for Parkrun, and lives in London with her husband and daughter.

TrainingPeaks has partnered with British Triathlon and British Cycling to ensure the continued delivery of world class education for coaches, and all of their certified coaches will receive $120 off Summit pricing. Additionally, for all American coaches, USA Cycling and USA Triathlon will continue to be endorsing partners, providing continuing education credits for both the in-person and online Summit.

“We’re delighted to have teamed up with TrainingPeaks to bring the TrainingPeaks Endurance Coaching Summit to Manchester,” said Paul Moss, Head of Coaching and Volunteering at British Triathlon. “I’m really proud of our track record in what we do to support our coaches and being able to offer a discount on the delegate rates to our coach members is really important to us. Everything about this event will be world-class, from the speakers, the diversity in topics to the facilities. We look forward welcoming our coaches to the Summit!”

More than 600 coaches from 15 countries have attended previous ECS events. The 2018 Summit will build off the same successful format, including keynote presentations mixed with valuable, smaller breakout sessions with thought leaders from the endurance sports industry.

ECS will cover the key business challenges faced by today’s coaches to give them the tools needed to grow their brands, increase their clientele and fine-tune their coaching practices. Attendees will also gain practical insights into the latest research and science-based strategies. Previous speakers include Joe Friel, Dave Scott, Dr. Iñigo San Milan, Neal Henderson, Siri Lindley, Dr. Allen Lim and Bobby McGee, among others.

“It’s very exciting that this world-class event will be hosted on our doorstep in Manchester and coaches will be able to access valuable, hands-on workshops at a world-renowned location for what promises to be a truly one-of-a-kind event.” said Vinny Webb, Head of Education at British Cycling. “Coaches will have access to the same facilities and experts used by British Cycling at the Manchester Institute of Health & Performance (MIHP), regarded as one of the top high performance institutes in the world.”

TrainingPeaks, British Cycling and British Triathlon are working together to bring a world-class list of presenters for the 2018 Endurance Coaching Summit. Presenters will bring a background of science-based training methodologies, extensive coaching experience and business expertise.

A full announcement of the Summit agenda and speaker lineup is expected soon.

For more details and to register for Early Bird Registration rates, visit EnduranceCoachingSummit.com.