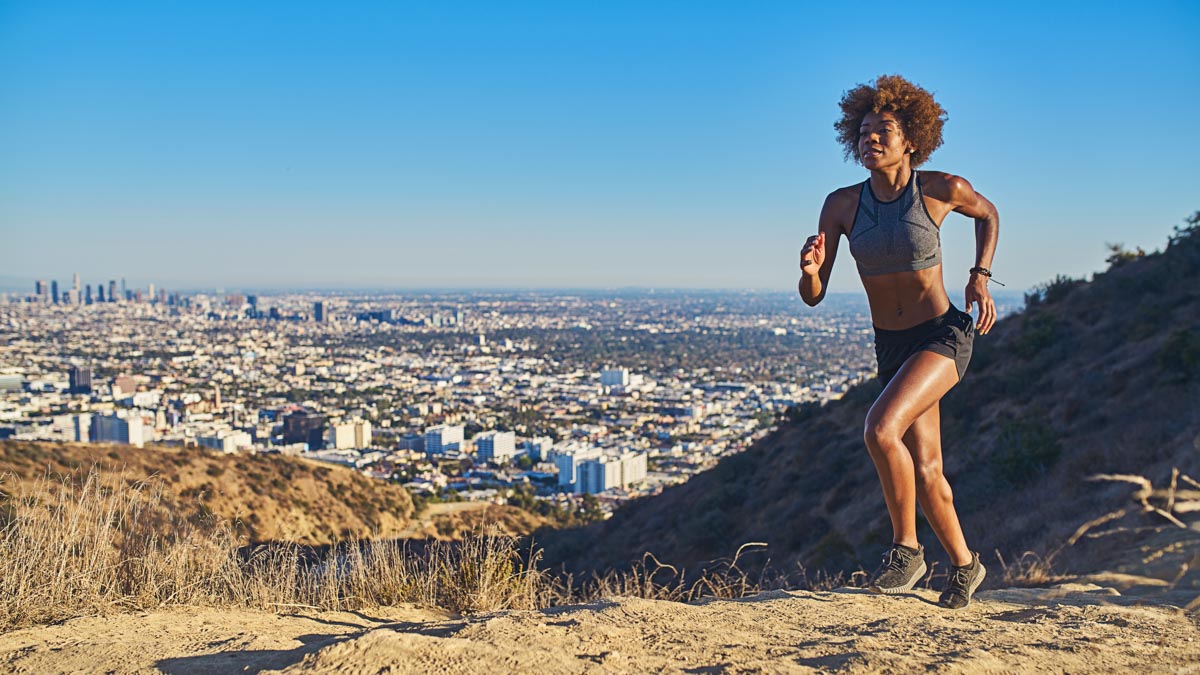 Trail Running vs. Road Running and Why Your Athletes Need Both

Got athletes interested in changing up their running surface type? Here’s what road runners & trail runners alike can gain from trying something new.

Looking back, most runners fell into one of two categories: trail or road. Now, things are a little different. In many cases, athletes are at minimum dipping their toes into both. For some, this phenomenon spings from simple curiosity, while for others, it’s a matter of gaining physiological advantages from adaptation. In this article, we’ll explore some of the ways changing surfaces alters the physical demands of running and suggest how you could incorporate both into your clients’ programming.

If you were to ask one of your athletes to do a five-mile road run on Monday and a trail five-miler on Wednesday, the chances are that they’d have very different feedback about the experience. From a purely physical standpoint, they’d probably be more beaten up by going off-road. A study published in Frontiers in Physiology put it simply: “Trail running is challenging, due to varying surfaces and inclines compared to track and road running.” However, there have been few studies on trail runners compared to their road-running peers and even fewer that try a side-by-side evaluation, so it’s difficult to make definitive statements about how the body responds differently to trails.

That being said, the Swedish scientists who released the paper titled, Frontiers in Physiology, took a crack at identifying the unique demands of run training and found when going downhill, participants generated high peak forces, shortened their stride patterns and reduced their ground contact time. They also noted that stride length among road runners typically goes the other way—when they try to increase the pace, their stride lengthens on even surfaces to gain more ground.

When heading uphill, oxygen cost was increased by an average of 25 percent, while VO2 max levels remained consistent with running on a flat section of the course. They also remarked that running economy, expressed by oxygen cost per meter, increased during uphill sections. This is consistent with the results of another study released via Medicine & Science in Sports & Exercise, which concluded that “oxygen consumption averaged 100.4% of runner’s individual ventilatory thresholds on uphills, 78.9% on downhills, and 89.3% on level sections.”

The varying physical demands of trail running don’t exist in isolation but are closely related to tactical and technical elements. A group of researchers from Queensland University of Technology in Australia wrote that one of the most challenging aspects of running off road is “the need for runners to select an optimal speed and vary it to meet environmental conditions, including changes in surface, direction, and gradient. Of these factors, changes in gradient pose a special challenge as they involve the largest changes in energy expenditure, and any misjudgments of pace carry high performance costs.”

In other words, if you’re going to have some or all of your athletes tackle trails, you’ll need to spend time with them discussing pacing in relation to varied terrain. If they’re going to be running on a mostly flat section with few obstacles, then they can probably self-regulate a fairly even pace on their own. Whereas if they’ll be navigating an undulating route that’s strewn with tree branches and rocks, they might need greater guidance on when to push and when to back off.

Such technical terrain is also going to take a greater mental toll on athletes than logging mile after mile on the roads. Certainly, if one of your athletes pounds the pavement along busy city streets, they’ll have to watch for curbs, pedestrians, and so on, which can be somewhat taxing. But venturing off road presents a whole host of challenges that require continual attention, including off-leash dogs, mountain bikers, streams, downed tree limbs and so on. As a result, an athlete might well be more mentally drained by a trail session than they would be on a road run of similar distance. You should take this into account when programming both training stimuli and recovery.

So how should you unite road and trail running in your athletes’ programs? Both probably have a place but as always, it’s best to start with their goals and work backward. If a client is taking aim at Leadville, the XTERRA Trail Run Series, or other events that will take them off road, then they need to get plenty of work in on trails, and supplement this with some road running. Whereas if they’re targeting road races, they’ll want to stick to the pavement most of the time, particularly as they approach events due to the increased risk of taking a tumble on trails. So if you’re going to build in trail running, perhaps put this earlier in a training block rather than later.

As well as taking the balance between trail and road work into account, you’ll also want to consider training targets. It’s doubtful that even an off road legend like Kilian Jornet could keep up the same pace while heading up a steep, windy trail as he could if he was on a flat, well-maintained road, so be sure to set realistic (and somewhat conservative) times for your clients to aim for. Varied terrain might also make it hard to sustain even splits, as a runner might labor up an incline and then fly through a downhill stretch.

This might carry over when they get back to road running. As an article in Running Science put it, “Something we often see is trail runners taking on some road running workouts and struggling to maintain a consistent pace, as they are used to more fluctuation in their efforts due to the nature of their routes.”

Another consideration if you’re going to put a client through more trail workouts is that their legs will need to be strong due to having to remain stable on uneven ground. So building in some gym work that involves jumping, hopping, and bounding in multiple directions will be beneficial, as will exercises like lunges and split squats that require creating force off of one leg while maintaining stability.

The Swedish exercise scientists mentioned earlier suggested what kinds of off-road training would be most beneficial for athletes aiming to compete in trail races. “In terms of performance gains, trail runners with less experience should target to improve downhill running skills,” they wrote. “For the more advanced trail runner, improving uphill running skills seems to favor performance in shorter trail running competitions.”

Your clients who want to get the most out of their trail training should also focus some time on a less obvious type of terrain. According to the authors of the Medicine & Science in Sports & Exercise study, “Optimizing time on the level sections after hills offers the greatest potential to minimize overall time when running over undulating terrain.”

Equipment is another important consideration. It might sound like a given but encourage your athletes to consider their footwear before they head off the beaten path. The exaggerated tread and more durable rubber compound on the outsole of trail shoes will help them grip better than a road version would, and ripstop uppers on the former will stand up to snags and tears better than the airy, thin material on the latter. Also suggest models that incorporate a rock plate if your clients will be tackling stony trails so they don’t bruise the soles of their feet. Packing a light shell in case a rain shower strikes along with plenty of water is another must for trail running.

About Phil White
Phil White is an Emmy-nominated writer and the co-author of The 17 Hour Fast with Dr. Frank Merritt, Waterman 2.0 with Kelly Starrett, and Unplugged with Andy Galpin and Brian Mackenzie. Learn more at www.philwhitebooks.com and follow Phil on Instagram @philwhitebooks.
#FUNDAMENTALS#INSPIRATION