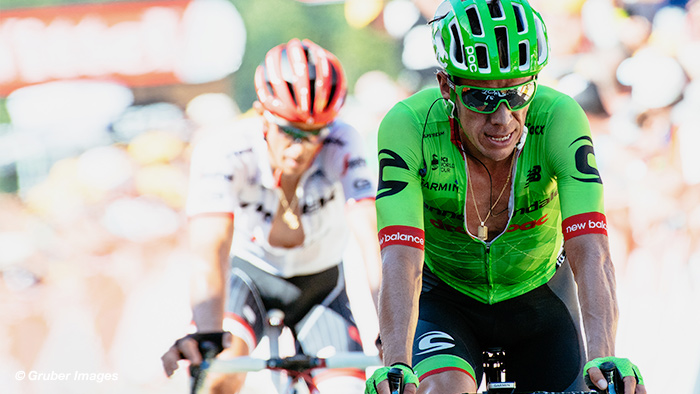 A look into the numbers behind van Baarle’s 150-km breakaway and Uran’s massive climb up La Planche de Belles Filles.

Stage 5 was set to be the first showdown of the GC contenders of the 2017 Tour de France and it did not disappoint. A strong seven man group went early on the attack which had riders such as Philippe Gilbert (Quick-Step Floors) and Dylan van Baarle (Cannondale-Drapac).

The BMC-led peloton did not give them much freedom, which meant a very fast stage and a full gas ride for everyone during this “short” 160km stage. The break was inevitably caught on the early slopes of the hill-top finish to La Planche de Belles Filles.

The 6 km, 8.5 percent gradient climb proved too difficult for many GC contenders, with riders such as Nairo Quintana (COL)  from Movistar Team and Jakob Fuglsang (DEN) from Astana Pro Team losing important seconds to their rivals.

Fabio Aru took flight in the closing 2 kilometres and went on to win the stage with a 16 second gap to the fast approaching Irishman Dan Martin of Quick-Step Floors.

In this analysis, we’ll take a look at how Cannondale Drapac teammates Dylan van Baarle and Rigoberto Uran fared during this speedy stage. Van Baarle’s early break, coupled with Uran’s final push during the climb up La Planche Des Belles Filles show how a classics rider and a climber each play to their own strengths during a Grand Tour.

The Cannondale Drapac team were again keeping to their word in making this race as aggressive as possible by putting riders in many of the breakaways throughout the Tour so far. Stage 5 was no different with Classics specialist Dylan Van Baarle making the main break of the day.

His effort to get into the move was again a massive effort and in the first 5km of racing he produced all of his peak powers from two seconds to five minutes. His initial attack from the drop of the flag saw an effort maxing out at 1224w, 15.7 w/kg as he jumped hard to get the gap.

The full attack to get the group some distance to the peloton seen him do an effort for 5:17 at 455w average, 5.83 w/kg at 53.9kmh. This “top heavy” effort in producing a huge anaerobic punch at over 1000w and then settling into a max aerobic effort was enough for them to edge out a lead and get that critical gap as quick as possible.

The pace did not ease as the BMC lead peloton was determined to not give the break too much distance. This meant that the break had a work to its full capacity and try and maintain their two to three-minute advantage over the strung-out peloton. Here is a break down hour-by-hour of the effort to be in the lead break:

The pace was relentless throughout the stage, which is evident from the power seen by van Baarle across the stage.

The hilly terrain was started in earnest after 104 km when they hit the Côte d’Esmoulières 2.3-kilometre-long climb at 8% – category 3. Here, the break was riding to its maximum and this is clear to see with van Baarle’s data, he rode the climb in 7:12 averaging 449w, 5.76 w/kg. This was not far off the effort he did in the first 5km of the stage as he jumped into the break, but with lots of fatigue already built up at this point I expect this was a painful experience.

The pace continued on the dragging roads prior to the start of the Belles Filles climb and the break started to disintegrate as they fought to stay away. Van Baarle’s exploits came to an end with 6.5km to go when he was caught by the peloton on the early slopes of the final climb. Big day out for van Baarle on the first mountain stage of the Tour.

Today’s first test for the overall contenders was passed with flying colours by Rigoberto Uran who had a fantastic finish today on the mountain. Uran only lost 26 seconds to the stage winner, also finishing ahead of many GC favourites like Nairo Quintana. This was likely a great confidence boost for Uran, possibly cementing his belief in being a contender for a top-10 overall Tour finish.

The day started with aggressive racing from his teammate Dylan Van Baarle who was in the main break of the day, this left Uran with the protection to sit in the bunch protected by his teammates and keep his position to the front of the peloton without using too much energy.

Below is a hour by hour comparison on the first three hours of racing, which Uran spent in the comfort of a fast moving bunch. Generally, he was between 0.8-1 w/kg lower than that of his teammate van Baarle in the break, this was enough to allow him to hit the bottom of the final climb in great condition.

The pace started to heat up on the long drag between the Cat 3 Côte d’Esmoulières and the final Cat 1 climb La Planche Des Belles Filles. On this drag, which lasted around 11km at a 2.3 percent grade, the pace in the bunch was very high. Uran averaged nearly 40 kph over this period, and on the approach to the final climb he averaged 297 w, 4.71 w/kg for this 16 minute effort. Keeping to the front was clearly the priority as he hit the bottom of the final climb in good position.

The final climb was a 5.9 km monster that averaged 8.5 percent and had a kick up to nearly 20 percent close to the top of the climb. Rigoberto rode a solid tempo for the majority of the final climb keeping his effort consistent at 379 w, 6.02 w/kg.

The final push for the line on the extremely steep grade of 20 percent was a full-out effort to make up ground to the lead group, which was just a few meters in front.
In the last 300m of the stage Rigoberto made a phenomenal effort for 53 seconds at 589 w average, 9.35 w/kg and maxing out at 875 w during this time. He also hit his max HR for the day here (unsurprisingly) which was at 191 bpm!

The finish on the six kilometer climb was the first true test of the GC riders, with Uran passing the test in great condition. Although it was a shorter climb and flat approach compared to that which will come later in the Tour, this was still an indication of form for the top riders.

Hitting the “magic number” of 6 w/kg on the final climb will likely give Uran confidence and see him fighting to push into the top-10 or even top-5 in GC and even possibly hit out for a stage win later in the race.