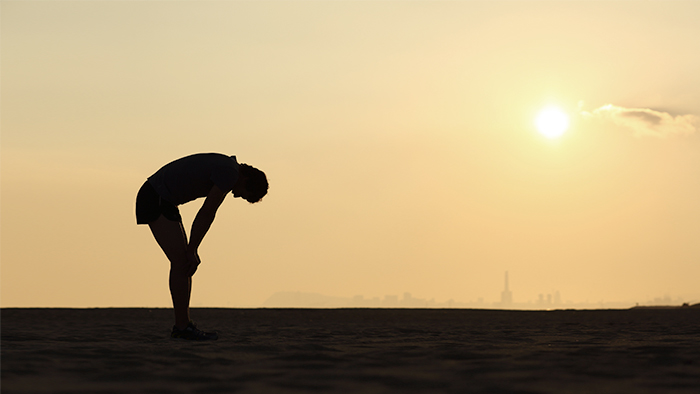 Stop Counting Calories If You Want to Lose Weight

For many endurance athletes, calories in do not equal calories out. If you have trouble losing weight despite heavy training and a restricted diet, the problem may be in what and when you’re eating and not how much.

If your key health markers are all in the “perfect” range, you can skip this column. Additionally, if you can easily lose weight and keep it off by eating a standard athletic diet (55-to 65-percent carbohydrate) and restricting calories by some 200 to 500 per day, give the column a pass.

However, if you constantly find yourself frustrated with your weight despite calorie-counting restrictions and consistent exercise, read on.

In 2014, an IRONMAN athlete with metabolic syndrome came to me seeking help. His major issue was weight gain in spite of exercise. For example, he gained 10 to 12 pounds each time he trained for a marathon. His concern was that training for an Ironman would cause his weight to balloon. The second concern he had was speed work. Traditional speed work training contributed to his weight issue. That athlete, Mike Berland, eventually became my co-author for the book, Become a Fat-Burning Machine.

Many experts now believe that insulin resistance is the root cause of metabolic syndrome as well as several other diseases including diabetes and cardiovascular disease. If you have insulin resistance, your body is not good at using calories from sugars and certain carbohydrates for energy, but your body is great at shuttling the calories to fat storage.

This is in part due to insulin, nicknamed “the fat storage hormone.” Insulin is a hormone that shuttles glucose into cells to be used as energy. The insulin receptors on your muscles operate under a lock-and-key system. The insulin docks into an insulin receptor, turns the key, and lets the sugar into the muscle. But when you have insulin resistance, the insulin doesn’t open the door. You literally can’t get sugar into the muscle, and instead you store those calories as fat.

Insulin resistance doesn’t happen overnight. One study1, 2 found that insulin resistance can be measured more than a decade before full-blown diabetes occurs and it is a progressive disease. This, in part, explains why people with insulin resistance find it more and more difficult to lose weight—in spite of cutting calories.

Insulin, released by the pancreas, is just one of the hormones affecting weight loss. A second hormone, PYY (pancreatic peptide YY), is released by the small intestine beginning about 20 minutes after we start to eat. It works to slow gastric emptying and gives us signals to reduce appetite during meals.

A third hormone, leptin, is released by the fat cells in adipose tissue, nicknamed “the satiety hormone”  and it works to reduce hunger. Ghrelin, on the other hand, is released primarily in the stomach and is nicknamed the “hunger hormone.” It works to increase our appetites.

The macronutrient composition of every food and drink we consume has an influence on hormones and metabolism. To ignore this fact and only worry about counting calories, no matter the composition of the calories, is a recipe for weight loss failure.

Several studies have controlled macronutrient profiles, calorie intake and weight loss. One such study3 done in 2004 looked at 15 overweight men and 13 overweight, premenopausal women over a 30-day period. Analysis of food diaries revealed that the group consuming a low-carb diet (~9-percent carbohydrates, 63-percent fat and 28-percent protein) lost more weight than the low-fat diet group (~58-percent carbohydrates, 22-percent fat and 20-percent protein) in spite of eating nearly 300 calories MORE per day. The men on the low-carb diet lost three times as much abdominal fat as the men on the low-fat diet.

Dr. Jeff Volek, a professor in the Department of Human Sciences at Ohio State University and a Registered Dietitian, did a study4 on the correlation of a high fat diet and athletic performance. The study compares two sets of evenly matched, elite male distance runners.

One of the biggest results of Volek’s study revealed that the fat-adapted athletes burned more fat at a higher pace than the traditional carbohydrate diet group. Peak fat oxidation was 2.3 times higher in the group that consumed a high fat diet. For endurance athletes, this means they have a significantly lower need for supplemental carbohydrates during training and racing, because more fat is being utilized as fuel.

The composition of what you eat matters more than calorie count

If you want to lose weight, improve your health and improve your ability to burn fat during exercise, you must consider food macronutrient profiles, and you don’t have to eat a 70-percent fat diet to see results.

You do have to stop thinking that only calorie-count matters. Food macronutrient and micronutrient profiles combined with nutrient-timing strategies can have a large, positive effect on your weight, health and performance.

What you can do today

One thing you can do today is keep a very simple food log noting only four items:

This simple exercise can help you identify foods that allow you to be satisfied for long periods of time and foods that drive hunger to higher levels within a couple of hours after eating. The results of the food log can help you decide if you need to make changes.

For a place to begin making changes, read the book, “Become a Fat-Burning Machine.”