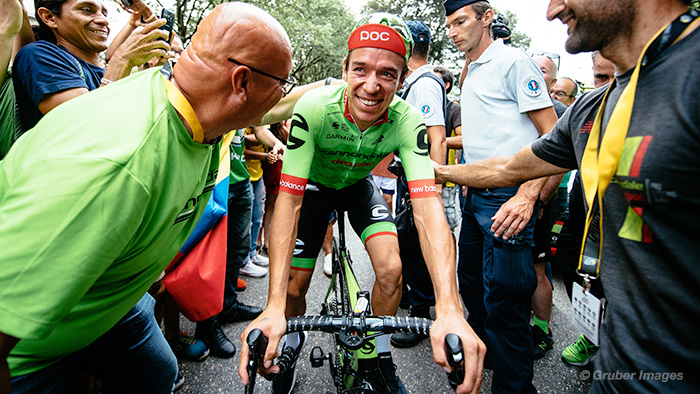 Stage 9 Power Analysis: What it Takes to Win a Mountain Tour Stage

With 4,000m or more of elevation and three HC climbs, Stage 9 was dubbed the “Queen Stage” of this year’s Tour de France. Rain only made things more difficult for the peloton from the start in Nantua. Several crashes influenced the outcome of the stage, as the wet conditions played havoc on the long, twisting descents during the stage.

An early move of 38 riders went clear after only 7 km of racing, when the road was already sloping uphill. This group was to gradually be narrowed down over the course of the stage until only a handful of riders remained.

One of those in the lead was French rider Warren Barguil (Team Sunweb), who came very close to a stage win. He was in the lead all day, only getting caught with 7km to go by a select group of GC favorites.

He still contested the sprint, but ultimately lost to Rigoberto Uran (Cannondale-Drapac) by just a matter of millimeters. The result was overshadowed by a crash of Richie Porte (BMC), who lost control on the dangerous descent of the Mont du Chat, ending his 2017 Tour.

We have the rare and fortunate position of having the stage winner’s file from a major mountain stage in the Tour de France. Thanks to Rigoberto Uran and Team Cannondale-Drapac for sharing this data.

With the start of the stage starting on a climb—combined with a very aggressive start—it was clear there was a big effort from the start gun for the entire peloton.

This was a hard start, and the riders still had a long way to go with five categorized climbs to come. At this point of the race, a large group of 30+ riders left the peloton and would go on to play a big part in the final of the race.

The first big obstacle of the day was the Col de la Biche. The peloton trailed a large escape group, who had more than a three minute advantage to the GC group containing Uran. The pace was controlled by Team Sky, with Uran being well protected by his team.

Coming off the Col de la Biche, the speed was on, but Team AG2R tried to create a split in the peloton. They used a small ascent and the wet conditions in the subsequent descent. The short climb required 404w, 6.41w/kg from Uran. In the 9km descent, Uran averaged 59.6 kph, maxing out at 79.2 kph.

The Grand Colombier started very quickly after the descent off the Col de la Biche, so the riders had little chance to recuperate between the two massive HC climbs. Fatigue started to settle in, and many riders started to drop out of the leading break as well as the peloton. The Yellow Jersey group was whittled down to the GC contenders and their key domestiques.

The descent off the Grand Colombier was again quick and technical, Uran passed this without incident. He hit a max speed of 88.4 kph during the long downhill. Once in the valley, the Yellow Jersey group still had a three-minute deficit to the leading breakaway.

Uran could settle down into the “comfort” of what was left of the peloton and ride for 30 minutes at a moderate normalized power of 222w, 3.53w/kg. The pace was still high with an average speed of 47.5kph. For the favorites, this was the last opportunity to refuel as the riders approached the fearful Mont du Chat (8 km at 10.1 percent).

The difficult climb was the first climb of the 2017 Tour de France and caused very critical time gaps, as well as the end to many GC contenders’ hopes. The likes of Alberto Contador and Nairo Quintana fought hard to stay within reach of the Yellow jersey group but the high and consistent pace— interspersed with several attacks—proved too much for some.

The descent off the Mont du Chat had been anticipated to be dangerous. Unfortunately, it proved too much for Richie Porte (BMC), as he crashed out of the TDF. The six-man strong GC group chased the leader on the road, Warren Barguil (Team Sunweb), and followed the attack of Romain Bardet (AG2R). Uran averaged 59.2kph for the 13.2km descent and hit a max speed of 84.3kph on the wet and slippery roads. Many risks had to be taken here to stay with the lead group.

The last 10 km of the stage saw more drama play out. Barguil was caught by Bardet and the Yellow Jersey group, including Uran. The Colombian had a mechanical issue at the worst moment on the last short climb, due to a bent derailleur hanger and broken shifting after avoiding the Martin/Porte crash.

Still, he was able to hang on, churning a huge gear at 339w, 5.38w/kg for 4:03 minutes. His cadence dropped to 70 rpm. Bardet was caught in the closing 5 km and it came down to a group sprint with everything to play for.

In the last 1 km, Uran was in second position, sitting on Chris Froome’s wheel, as they negotiated the final turns leading into the finish in Chambéry. In the section between 1 km to go and a right-hand bend with 550m to go, Uran averaged 463w, 521w normalized for 35 seconds as he rode behind Chris Froome.

The final push for the line was started when Jakob Fuglsang (Astana) made an attack with 440m to go: Uran was the first to respond to this move and it was at this point when he hit his peak power of 1189w, 18.73w/kg jumping on the Dane’s wheel.

On the following 210m, when he was making the bridge, Uran had to make an effort of 1025w at 83 rpm as he wrestled his big gear. He kept the effort going into the last 150m, averaging 816w and sprinting at nearly 56 kph.

Analysis of the final km

His effort was decreasing as the line approached, but it was enough for him to take a narrow victory from Frenchman Warren Barguil. An exciting finish to a dramatic day in the 2017 Tour de France.

The mountain marathon through the Ain and Savoie regions was supposed to be the first big battle in the GC, causing big gaps—and it delivered. From a performance perspective, the power numbers on the climbs were lower than you would expect on a decisive mountain stage. Instead of values close to 6w/kg, the favorites stuck to  between 5 and 5.5w/kg on the Grand Colombier and the Mont du Chat, where the stage was decided.

This stage was a testament to the super-tough first week of this year’s race. Uran raced particularly smart, saving energy whenever possible and therefore being able to produce a fantastic sprint. Even a mechanical issue didn’t stop him. In this form, he will be a strong contender for the podium and should be able to cause trouble for this rivals in the mountain stages to come!