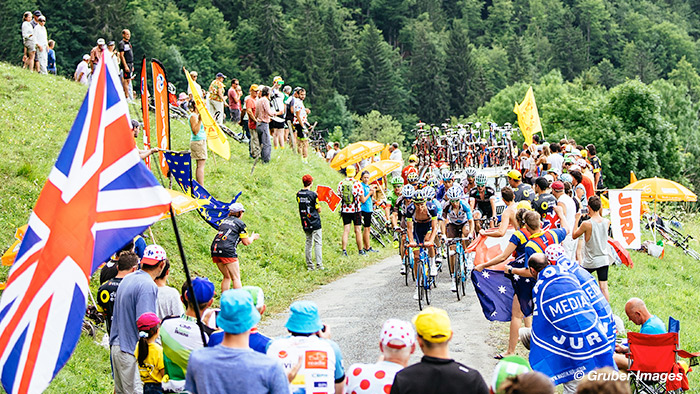 Stage 8 was an epic battle for the win, however the GC favourites did not to attack each other during the final. After one of the most intense starting phase in recent years, a 46-man strong breakaway got away and contested for stage honours. The young French hope Lilian Calmejane took the victory ahead of Robert Gesink and also raced into the lead in the Mountains Classification.

Today we’ll be looking at one of the GC contenders, Roman Kreuziger (Orica Scott), as well as Cannondale-Drapac’s Nathan Brown, who had his second breakout performance of the Tour, especially during the tough final climb up Montée de la Combe.

Click on the image below to see Kreuziger’s SRM Power File:

Kreuziger was able to ride with the GC favourites all day. He was never in real difficulty, even on a very fast day. His numbers, 41.5kph average speed and 314 w normalized power on a medium mountain stage, are a strong indication that the serious competition for the overall classification has begun.

There were only three categorized climbs along the route, but the medium mountains of the Jura included several short ascents that made the race particularly difficult. The race broke apart on the first longer climb after about 30km, still in the first hour.

No break was escape at this point and the pace was incredibly high. Plenty of riders tried to establish a group and Kreuziger had to ride with 397 w, 5.97w/kg for 8:30 minutes. The whole first hour saw him produce 313 w normalized at a speed of 47.2 kph.

Kreuziger’s power on the climbs:

All three climbs presented a challenge for the riders, but with four to six percent, the gradients weren’t too steep. The break’s advantage was controlled by a very steady pace set by Team Sky – not comfortable, but never forcing the strong climbers to go into the red. A group of about 40 riders crested the final climb. A very solid day for the Czech all-rounder. In the sprint for third position, he showed his strong form by sprinting to fifth place in the stage with an effort of 803 w, 11.98w/kg.

Brown was one of the revelations of stage 8. He finished in the leading group on a tough mountain stage and even sprinted for a top-10 result in Station de Rousse. His normalized power over 4.5 hours of nearly 5 w/kg shows what a hard stage it was.

Brown’s performance on the first climb after 30 km:

Brown’s power on the climbs:

After his strong ride on stage 3, when he claimed the Polka Dot jersey for a few days, Brown was close to the action once again. His peak performance of 413 w, 6.35 w/kg for 8:35 minutes came after just 35 km —a world class effort!

Instead of paying later in the stage, Brown remained at the front during the long and intense chase after the large breakaway. Even on the last 3 km he still rode at 360 w and sprinted to ninth place.

The second medium mountain stage of this Tour de France delivered exciting racing at the highest level. Every climb was ridden far in extent of 5 w/kg, but the riders never ventured into the 6 w/kg realm. This explains how such a large group arrived together in Station de Rousse and how Lilian Calmejane and Robert Gesink managed to keep their advantage on the final climb. Had there been more action from the main favourites, the possibility of success for the escapees would’ve been severely diminished. The high pace all day means that the riders will still feel this stage in their legs later, and the tough climbs to come in the second week will reveal how impactful stage 8 really was.