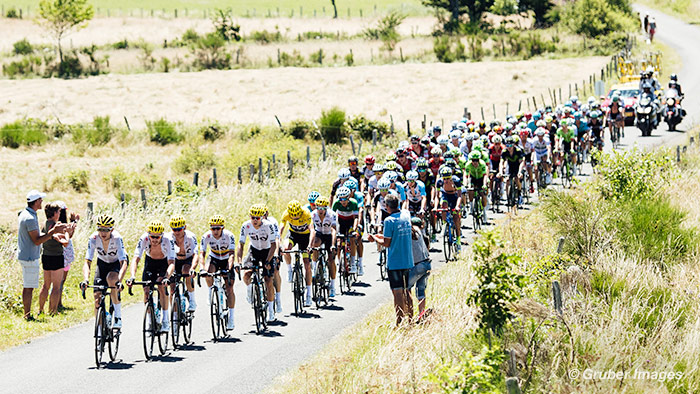 The stage through the Massif Central was characterised by a Cat 1 climb at the start and a Cat 1 climb inside the last 40km, with rolling terrain in between. A large group went early in the race and the survivors of the final Cat 1 climb fought it out for the stage win.

Bauke Mollema (Trek-Segafredo) won solo after attacking the group on the descent of the last climb with about 30km to go. Behind, there was chaos in the GC group as race leader Chris Froome (Team Sky) punctured when AG2R La Mondiale was riding full gas at the front of the group. Froome was able to regain contact despite the massive pace in the group and kept his lead, but only after a tough chase and some hard racing.

Stage 15 was supposed to be another transition stage with some medium mountain climbs before the riders reach the real Alpine passes. What it became was an intense challenge, not just for the successful 28-man break including stage winner Mollema, but also for the guys fighting for a podium spot in Paris.

Normalized Power in extent of 4.5w/kg for both Cannondale-Drapac riders with 291w, 4.62w/kg and 353w, 4.53w/kg for Urán and van Baarle, respectively. Urán is still very much in contention, just 29 seconds down on Chris Froome and today he showed again why he is up there.

The intense race really took off on the first climb after 20km with several groups going up the road and a high pace in the Yellow Jersey group. It was all about that first climb, when they tested each other, and the final 40km, which featured one steep 8km climb.

Van Baarle’s incredible 452w for 23:09 minutes was his strongest long effort of this year’s Tour, and he made it into the breakaway once again. He has been there on various stages and still seems to be improving.

Before that, he had already produced his peak 30 second power with 637w, 8.17w/kg, and his peak one minute at 545w, 6.98w/kg in the opening kilometer of the stage when the first attacks went.

The Yellow Jersey group was not far behind as they were forced to chase after an aggressive Alberto Contador (Trek-Segafredo) before letting the break go and settling into a moderate tempo after the climb. For Urán, it was 353w, 5.60w/kg and 23:42 minutes on the climb and even 385w, 6.11w/kg on the first 4km, covering them in 10:34 minutes.

After that, the breakaway with van Baarle went on a three-hour long, hard race while the field rode at easier speeds and power until the approach of the last climb. The break rode cohesively to gain an advantage of more than six minutes.

Van Baarle rode the 115km between the major climbs in 2:47h with 262w average and 316w normalized power. Urán had to produce 165w and 220w normalized as the field covered the middle sector about 4:30 minutes slower. A significant difference in effort that would have an impact on the race, when the groups reached the category 1 Col de Peyra Taillade climb with 40 km to go.

Most Intense Climb of the Tour

The Col de Peyra Taillade would become the hardest test for the GC riders so far, while the break fought a stunning battle out front. The lead group rode hard into the 8.35km-long climb and started to splinter, with the pressure being put on by Serge Pauwels (Dimension Data) and Warren Barguil (Team Sunweb).

Even before the climb, the Yellow Jersey group started to split under the pace of Romain Bardet’s AG2R domestiques. Chris Froome was dropped after a puncture and started to chase but Urán was able to stay close to his rivals at the front. The tempo in the 6.5km before the climb: 49.7kph as Urán rode at 351w normalized before the road started to slope upward.

For the full climb, Urán put out 415w, 6.59w/kg for 22:33min – by far the toughest effort he had to produce during the Tour. AG2R rode themselves into the red, trying to prevent Froome from catching back on to them.

The steepest part of the climb required 430w for 8:16min from Urán – 6.83w/kg! After a lull in the middle sector of the stage, the top riders still had a lot of reserves left to produce their best efforts. The result: Power numbers off the charts at 6.5w/kg for more than 20 minutes—something we hadn’t seen up to this point!

The final kilometers saw some more action from the captains, as they attacked each other on the last short climb and Urán had to ride at 447w, 7.10w/kg for one minute to follow Simon Yates (Orica-Scott) and his other rivals.

Only Daniel Martin (Quick-Step) gained a small advantage and for the rest of the leaders, it was a moderate ride into Le Puy-en-Velay afterward, coming into the finish 6:30 minutes behind Bauke Mollema.

It was a surprisingly hard day for all the riders. Dylan van Baarle had to produce his best efforts in a breakaway and with a TSS of 322, this was one of his hardest days yet. The GC riders gave it their best shot before the rest day and even Urán had a TSS of 295, a Training Load equivalent to that of the high mountain stages.

The massive effort on the first and final climb of the day were only feasible with the upcoming rest day to help recover before the race hits the Alps. The strong performances by various Cannondale-Drapac riders will help focus the team on the final push to help Rigoberto Urán as he makes his bid for a podium in this year’s Tour de France.