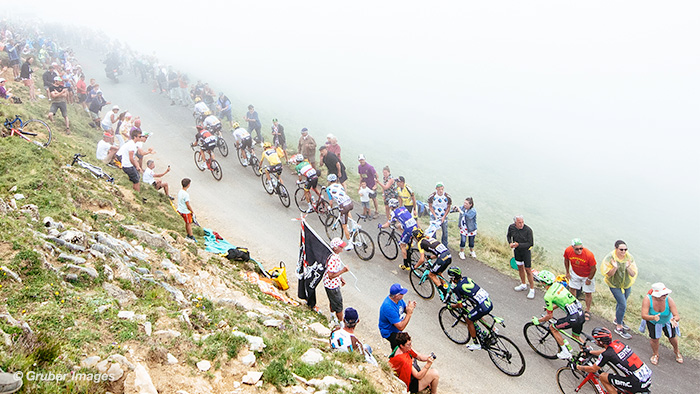 Despite an aggressive, long day of racing, Nathan Brown showed his ability to produce repeatedly long efforts at threshold.

Stage 12 may end up being one of the most decisive stages of the 2017 Tour de France. The day was fast from the start, and the aggressive riding caused a select group going early with Michael Matthews and Marcel Kittel in the break aiming to take up the intermediate sprint points.

Also in the group: English champion Steve Cummings (Dimension Data), who would go on a solo over the last two Pyrenees passes and was the last of the break to be caught as the favorites stormed up the last climb—the Col de Peyresourde.

The stage was won by the French star Romain Bardet (AG2R) while Chris Froome (Team Sky) lost time in the steep final 300m and therefore had to give up his Yellow Jersey to Fabio Aru (Astana).

To learn more about these TrainingPeaks metrics, click here.

Click on the image below to view Brown’s SRM Power File:

Despite the long day ahead, the riders were not put off with the distance and rode hard from the gun. This is shown by the effort of Nathan Brown (Cannondale-Drapac) in the opening 16.5km when he had to produce a 20:10min effort at 350w, 5.39w/kg normalized power.

Only after the Cummings move went and the field was content with its members did the peloton settle down to a controlled tempo. The lead break was able to get a large of lead of more than six minutes as they headed into the first climb.

The peloton had settled down into a steady effort after the breakaway established a solid lead. There were no dangerous riders in the break for the general classification and with 150km still to go, Brown was able to climb with an effort below 4.5 w/kg on the Côte de Capvern.

The status quo remained even until the second climb of the day, the Col de Ares at 112 kilometers into the stage. Brown was riding well within his sustainable pace. For the pros, it is not too difficult to ride at approx. 4.5w/kg for long periods of time.

The pace started to ramp up as the peloton approached the real mountains, and this increased pace was starting to show as the peloton began to whittle down.

During the climb up Col de Mentém Brown had to ride closer to his threshold, holding a constant effort around 5.3w/kg for the 22 minutes. After nearly two weeks at the Tour de France, these sub-threshold efforts take a significant toll on the riders.

With the time gap to the break coming down, the Team Sky train never eased off the pace and made a real impact on the lead group. As a result, a selected field tackled the Port de Balès, a very difficult pass with more than 10km length and around an 8 percent gradient.

Brown was still in there when they hit the bottom of the climb full gas. In the first 1.5km, he rode at 411w, 6.32w/kg for 3:35min. Instantly accumulating some fatigue, he settled into a steadier, but still strong rhythm for the rest of the climb. A speed of 18.2kph was the strong tempo on the full climb, which required an effort of 370w, 5.69w/kg for 32 minutes. Brown lost contact to the favorites group near the top.

Brown went on to ride close to threshold for 30 minutes after having already done nearly 200km. The effort at 5.31w/kg was enough to see Brown finish a fantastic 22nd place in this major mountain stage, only losing  five minutes to the leaders and stage winner Romain Bardet.

The massive TSS score of today’s stage shows the toughness of the day and the total volume of close to six hours in the saddle will see many riders falter in the coming days who fail to recover.

What we have seen from Brown’s data today is the incredible ability to produce repeated prolonged effort around threshold, even after two weeks of racing at the highest level possible. This is a great sign for the rest of the Tour and for the future of the American rider.