Should Triathletes Do Yoga? Part 1

Should triathletes do yoga? Find out in part one of this two-part series. 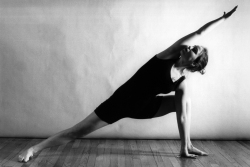 Allow me to begin this two-part series by informing you that I am a triathlete, and I personally do yoga 1-2 times per week. But I do yoga for relaxation, meditation and breath control purposes, and I don’t do yoga because I think it is going to make me any faster or reduce risk of injury.

You’re about to learn why.

Take running, for example. When your foot strikes the ground, your ankle flexes backwards as your body absorbs the impact and your knee bends. When the ankle begins to extend for the toe to push off the ground, the energy stored in your Achilles tendon during the foot planting phase is released. This is called a “stretch shortening” cycle (SSC), and the tighter your tendons are, the more explosively they can release that stored energy during the SSC.

Here’s where yoga comes in, or more specifically, doesn’t come in.

One way to keep tendons tight is to not engage in repeated stretching workouts – which is a reason why any good sprinter, jumper, or athlete in any other power sport knows to be careful with too much flexibility work like yoga. Stiff tendons create big forces very fast; stretchy, flexible tendons don’t.

I know what you’re wondering…what about inflexibility that causes injuries? Can’t being inflexible to the point where you are unable to move a joint through your desired range of motion cause an injury?

A study that reviewed over 360 other studies was published in the March 2004 issue of Medicine & Science in Sports & Exercise. This meta-study concluded that there was no evidence that stretching before or after exercise prevents injury or muscle soreness. It also found that being more flexible doesn’t prevent injuries.

However, the study did find that static stretching does in fact improve flexibility. It just turns out that the flexibility isn’t as useful as you may have thought. As a matter of fact, there is even a possibility that increased flexibility may actually allow your joint to move into potentially more strenuous positions, resulting in risk of subsequent soft-tissue damage around that joint.

So what is the take away message here? For triathlon, all you really need is enough flexibility to be able to move your joints through the same range of motion they’ll be moving through when you’re swimming, biking and running – and if your only goal is reducing risk of injury or maximizing force production, you don’t need to do any stretching above and beyond that.

Ultimately, should triathletes do yoga? In my personal opinion, the answer is yes – if time permits. Yoga has a range of benefits that go above and beyond simply making you more stretchy. As I mentioned in the beginning of this article, I personally do yoga for relaxation, meditation and breath control purposes.

In the meantime, compared to yoga there are in fact better, more functional ways to improve range of motion, such as dynamic stretching. Part 2 of this series will teach you more about that.

For more advice from Ben Greenfield, check out his training and nutrition plans on TrainingPeaks.

About Ben Greenfield
TrainingPeaks contributor Ben Greenfield, M.S. PE, NSCA-CPT, CSCS, is recognized as one of the top fitness, triathlon, nutrition and metabolism experts in the nation. For more information on coaching and training with Ben,'check out his blog/podcasts,'follow him on Twitter, or'visit his Facebook page.
#PERFORMANCE