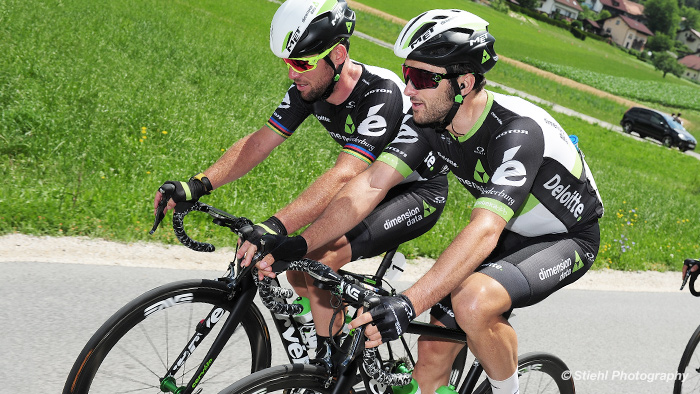 Team Dimension Data for Qhubeka has some big shoes to fill after a stellar Tour de France run in 2016. We sat down with their Head of Performance Sport and Medical, Dr. Carol Austin, to learn how they are using TrainingPeaks to hopefully repeat history this year.

We sat down with Dr. Carol Austin, Head of Performance Sport and Medical for Team Dimension Data for Qhubeka to learn more about how they rely on TrainingPeaks to plan their team’s season—and in the selection of their 2017 Tour de France roster. We also asked her to tell us how they are preparing star Tour rider Mark Cavendish for his return to racing after a long illness, and her thoughts on common altitude training strategies.

You don’t have a designated pre-Tour riding camp, but instead your athletes are on a more individualized program. Tell us more about that.

In November 2016 we had our annual preseason training camp in Cape Town, South Africa. , Each of our 28 riders had meetings with their coach and sports director to during which their individual 2017 annual race program was sketched out. Essentially our prep for the 2017 season is individualized after that point. We had two major team training camps in January, in Spain and Australia. Thereafter each rider’s preparation in terms of both their training and race program has been individualised and specific to their performance needs. There are a spectrum of strengths amongst the athletes that we want to leverage for the Tour, our goal is to have each of them in peak form and ready to deliver on their role/goals in July. Throughout the season TrainingPeaks helps us to remain closely connected and attuned to with our riders who train and race all over the globe.  TrainingPeaks facilitates both the athlete-coach sharing of data and feedback, as well as data analytics which allows our coach/sports scientists to optimize each rider’s program and preparation.

While we don’t have a large team training camp heading into the tour, we have had several smaller or individual camps in and around our Performance Center/Villa in Lucca, Italy. Most of our African origin riders live in Lucca, and while both including Mark Cavendish and Steve Cummings live in just 40 minutes away. Some of our other riders, like Serge Pauwels, Bernie Eisel and Mark Renshaw have also chosen to travel to Tuscany for short training camps, as this allows them to benefit from training in the heat and mountains and spend quality one-on-one time with their coaches and teammates.  Aside from the benefits of the physical training, they take the opportunity to tune into each other and discuss the upcoming tour. W

Last year your team had a stellar run at the Tour, so I imagine you are looking to mostly replicate things heading into this race. How are you using TrainingPeaks (i.e. CTL, TSS, communication with the athletes) to determine the workouts?

We had an incredible tour last year and won 5 stages out of 21, so going into this year’s tour the expectations are very high.

In our season planning, we reviewed our riders 2016 data and preparation with the goal of optimizing our 2017 plans. Thanks to the data we’ve collected and Training Peaks WKO4 we’re able to analyze their datasets, and repeat the preparation and training that we believe contributed to our success.

Unfortunately with all the best planning, we’ve had to face two massive curve balls with both of our 2016 stage winners. In Q1, Cavendish went down with Epstein Barr Virus season and Cummings had a bad crash that resulted in broke several bones. Our coaches and medical doctors have worked closely in the managing both riders training load and health needs during the time-constrained recovery and rebuild periods.

Thanks to the data we have for the past two seasons, we have an objective view on our riders form going into the tour and can manage our goals, focus and expectations accordingly.

Cummings tested his form at the GB National Championships last weekend, where he took both the Time Trial and Road Race titles.

We’re confident that Cavendish, is in the best possible form under the season’s challenging circumstances. Base mileage is always really important going into the Tour. Because he is an experienced rider, his sprinting ability has never been in question. Rebuilding one’s endurance base after a viral illness with tight performance timelines is difficult and needs to be carefully managed. Cavendish has managed to ramp up his training relatively rapidly under the watchful eye of his coach. TrainingPeaks allows us to carefully assess and monitor his fitness, fatigue and form levels during this process, and adjust training accordingly.

What types of data are you paying attention to in TrainingPeaks to let you know how the riders are performing during the Tour?

The data is helpful in the preparation of the riders before the Tour, and for the sports directors in terms of the race strategy once the race begins.

Training Peaks analyses provide objective data which aid in our rider selection process. We always want to take our best team, but how the “best team” is defined is strategy dependent. Our data is essential to making objective, factual and unemotional decisions. This information combined with the experience of our Sports Directors who determine the race strategy, allows us to make informed decisions. While you can’t underestimate in race performance and experience based intuition, we value objective data in making our decisions.

How are you relying on data when making gear selections?

In terms of new equipment, we have some new bikes that we’ve tested but that all took place quite earlier in the season.

Our bike fit partner is Retul and that has been really interesting what has come out of the data, particularly with trouble shooting issues.

In 2015 we worked closely with the Rotor engineers in the development of the Rotor2In power meter development. The 2IN has provided interesting insights into our rider’s L:R power balance and we’ve gained some new insights. We’ve used TrainingPeaks software to explore this data and noted changes in balance at different powers and fatigue levels. We’ve made some beautiful scatter graphs with in TrainingPeaks just looking at the different power levels across some really tough racing and tough climbing.

How do the riders interact with TrainingPeaks?

Our riders work well with TrainingPeaks software and it’s extensively used. Looking at how the guys are using data now compared to five years ago, they are auto-uploading their files while leaving a race on the bus using their Garmins, and making comments on it on their mobile phones. Carrying their computers around is just no longer the norm while on tour, so they rely on the TrainingPeaks Mobile App.

Also, during the Tour it’s helped us reduce the time between post-stage analysis and being able to give feedback to directors so they can have an increased understanding on the data and be preparing and strategizing for the next stage. Through the combination of athletes quickly auto-uploading and on the coaching side us looking at things in WKO4, our goal of providing feedback to the team within two hours of the race finish is now attainable. It’s a huge advantage and allows everyone to have more time to plan for the next day’s racing.

Our team composition is diverse. We’ve got riders on our team like Tyler Farrar from the U.S. who’s very tech savvy as well as young teammates on the Continental Team who have had little exposure to technology before joining our team. TrainingPeaks is user friendly enough for all. We have amazing coaches, who take the time to educate and upskill all riders on the technologies we use. For some riders learning this technology and understanding power based training has been—well, life and career changing.

As a general rule, we do see lower powers at altitude but it varies by-rider. When they are at altitude, again it’s dependent on your location, between 2,000 and 3,000 meters, we would usually see around a 5 to 7 percent power drop off. And we would change the training as they adapt to elevation. We’ve found that you need to go to sea level in order to get those really high power sessions, so a kind of live high and train low philosophy to a certain extent is how we execute things.

If you live at altitude, it can have limiting returns. However, there’s a lot of debate about altitude training in general. Some riders feel they benefit and some don’t. We generally say between 15 and 21 days up and then bring them back down to sea level or at least lower altitude. Most of the racing in Europe is at low altitude, so you want to produce the powers that you can at sea level because you need to produce those types of power while racing.

About Susan Legacki
Susan Grant Legacki is the Content Director at TrainingPeaks. The founding editor of LAVA Magazine and a former editor at Triathlete Magazine and Inside Triathlon, Susan is an IRONMAN finisher, Boston Marathon qualifier, USAT Level 1 Triathlon Coach and certified Pilates instructor. When she's not editing or writing copy about endurance sports, you can usually find her training for them around Boulder, Colo.
#CYCLING