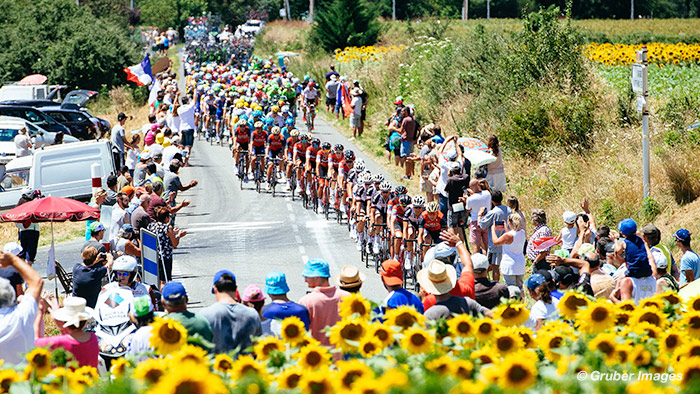 Power Analysis Stages 13 and 14: A Weekend of Intense Racing

High intensity and tough terrain have shuffled the GC leaderboard as the teams make their way into the Alps.

Today’s short Pyreneen stage was again proof that these short and intensive stages can bring around some very exciting racing. Warren Barguil (Team Sunweb) won stage 13 of the Tour de France in Foix at the end of a gripping afternoon of racing in the Pyrenees. Fabio Aru (Astana) retained his yellow jersey but saw Chris Froome’s Sky teammate Mikel Landa add himself to the list of contenders for final overall victory.

Overall data for the stage

Urán has become a firm contender for not just a podium place but for the overall win; with his incredible consistency on every climb in this year’s TDF, as well as his ability to avoid serious incidents—which have already claimed several of his competitors.

With a short stage offering a perfect excuse for an explosive start, it was no surprise to see Urán reach his peak one minute and two minute powers for the day in the opening 3 kilometers. In the opening 3:35 minutes, Urán’s normalized power was 424w, 6.81w/kg and he averaged 51.4kph!

Urán was at the front of the race sitting in the first 10 positions as the field hit the bottom of the Col de Latrape after 20km. The pace was being set by an early break with no real GC contenders in the mix yet.

The peloton hit the early slopes hard with continuous attacks going off the front. On the first 1.75km, Urán rode at 383w, 6.08w/kg for 4:33min. That would be the toughest part of the climb and the GC favorites were able to settle into a very quick but steady pace for the remainder of the ascent.

After that first test, the riders continued to head into the mountains as they chased the two leaders, Alberto Contador (Trek-Segafredo) and Mikel Landa (Team Sky), as well as a second group containing Nairo Quintana (Movistar) and Warren Barguil.

The next climb was the Col d’Agnes, the longest obstacle of the day: 10km at 8.2 percent. It saw the Yellow Jersey group ease their pace despite the steep gradient, while the escapees established a solid two minute lead.

The opening 2km of the climb were again the hardest, but not as aggressive. Urán produced 354w, 5.64w/kg for 7:01 minutes for the opening 2km and average 354w at 5.64 w/kg. For the whole climb, the average power decreased to around 5w/kg.

This slower pace was mainly due to the two riders of Team Sky who were in the break and prevented this team from driving the chase. It allowed the strongest climbers to save energy as they anticipated the final, decisive climb.

Anxiety started to build in the Yellow Jersey group as the gap to Landa, Contador and Quintana surpassed the 2:30-minute mark. Several teams wanted to protect their top-10 places, with LottoNL and UAE controlling the early, less steep sector of the last climb toward the small and twisting roads of the Mur de Péguère.

The real battle started on the second part of the final climb. The riders had to tackle the “Mur.” Nearly 3.4km at nearly 12 percent with ramps up to a 20-percent gradient. Even the best riders were at their limit now and many top-10 contenders fell off the group.

Urán was again among the best, even when Chris Froome attacked toward the top. Following the three-time Tour champion, Urán had to produce 419w, 6.65w/kg for 2:17min. And that after more than 10 minutes at close to the 6w/kg mark at 370w. His average heart rate reached 180 bpm during this period, indicating that the Colombian had to push to his maximum.

* Urán rode on the wheel of Martin as he set a hard tempo going into the Mur and finally was able to follow Froome as he attacked close to the top.

At the top, Urán was part of the main GC contender group, now down to eight riders. They were trailing the Contador/Landa group by about 1:45 minutes with 27km downhill to go. The long, gradual descent into the finish town of Foix saw more attacks from the main players of the Tour.

As the group approached the line, still two minutes behind the break, it was clear that they would be sprinting for 7th place. A couple of sharp turns made it a technical sprint with positioning in the last bend being a deciding factor. In the last 150m Urán averaged 882w, 14w/kg for 13 seconds and maxed out at 1070w to finish in 10th position.

Rigoberto Urán had another strong day in the mountains and never seemed in serious difficulty on the climbs. With the attacks of Froome on the last climb, Urán was one of the first to react and he has yet to of shown a chink in his armour.

While many of the GC riders in the top-10 have had bad periods in stages on some of the climbs, Urán has been one of a few riders who has not faltered, since losing a bit of time in the first medium mountain stage.

Riding most of the climbs around 5.5w/kg today, while avoiding going into the red too often, could prove critical as the peloton heads toward the Alps. The two days in the Pyrenees have been a success for Urán: He maintained his 4th position in the GC and did not lose any time to his main rivals.

When the race heads over altitudes of 2,000m+ on stages 17 and 18, this could become a big bonus for the rider from Colombia, who will be used to dealing with this altitude more so than the European-based riders.

The rolling roads across the Tarn region of France were the location for a perfect transition stage. The riders made their way through the Pyrenees and are now headed toward the high peaks of the Alps.

A constant up-and-down course (as well as erratic winds) opened a great opportunity for a breakaway to stay away or for an opportunist to take advantage of the narrow roads.

The strength of Team Sunweb proved too much for many as they helped Michael Matthews explode up the last 500m climb to the finish, taking his first victory of this year’s TDF – in a final that also caused surprising differences in the GC battle.

Brown was once again working tirelessly for team leader Rigoberto Urán to make sure the Colombian had an easy and calm stage. This relaxed start to the day can be seen from the data in Brown’s first two hours of racing which was done at a low Intensity Factor (IF) of 0.58. This was a welcome easy start for the field after the furious speeds from the gun on previous days.

It was the calm before the storm, however. As soon as the race arrived in the hills north of Albi, the pace started to ramp up. The field headed deeper into the Tarn and featured to classified climbs with countless other short inclines.

The third hour required 254w, 3.91w/kg from Brown as the bunch started to slowly decrease the advantage of the day’s long break, which consisted of breakaway specialists Thomas Voeckler (Direct Energie) and Thomas De Gendt (Lotto-Soudal).

With 50km to go on the first KOM, the Côte du Viaduct, the chase was at full flight. Brown stayed close to his captain, putting out 393w, 6.03w/kg for the 2.3km-long climb!

This was huge power on what was supposed to be an easier day for the riders shielded in the field, especially after two intense days in the Pyrenees. A main challenge on these climbs is positioning, getting the team leader into a good place within the bunch in case of any splits or crashes.

The second KOM (côte de Centrès) came with 35km to go and forced the riders into an even harder effort. Nathan reached his peak one minute power at the bottom of climb: 495w, 7.55w/kg.

He fought to stay in contention at the bottom of this climb, when the pace jumped considerably due to Team Sunweb’s high pace.

The average power for this climb was significantly above threshold at 6.5w/kg and the critical difference to the previous one was the heavy intensity at the bottom of the Côte de Centrès. This sort of effort causes a lot of suffering two weeks into the Tour and made the upcoming final even harder.

The speed of the field did not drop after the Côte de Centrès. BMC tried to take advantage of cross winds, which caused some chaos in the peloton. Another tough effort was required as BMC made drilled it at the front for pre-stage favorite Greg Van Avermaet.

This hard six-minute effort saw Brown jump into the bunch lineout and fight to hold the wheel, trying to keep up with the BMC effort. Numerous riders got distanced by the peloton—a full gas battle with 30km to go.

The final climb proved to be difficult, perhaps even tougher and more critical than many had expected. With a fast pace in the final downhill run into the town of Rodez, the field was strung out and positioning became a huge factor.

Brown’s speed on the final 7km before the climb was 59.2kph. At this stage, lone leader Thomas De Gendt was swallowed up and the race was set for a bunch-kick up this 500m climb.

Matthews out-gunned Van Avermaet to win his first stage, and Brown rode in at just over one minute down on the winner after successfully helping keep Urán in the front and out of trouble in the final run into the climb. The effort required to finish 1:15 minute down on the stage winner shows how hard the final was.

There have been very few “easy” stages in the Tour de France 2017 and the 14th certainly wasn’t one of them. The pace in the final 50km caused a lot of stress, physically and mentally, and will cause more fatigue moving forward.

Many teams likely hoped they would’ve allowed their GC riders and domestiques a moderate ride and recharge before the Alps, but instead they had to fight on all the climbs and in the final to even stay in contact. Even this transition stage caused changes in the General Classification, showing just how hard this Tour is. At no point can the riders switch off!