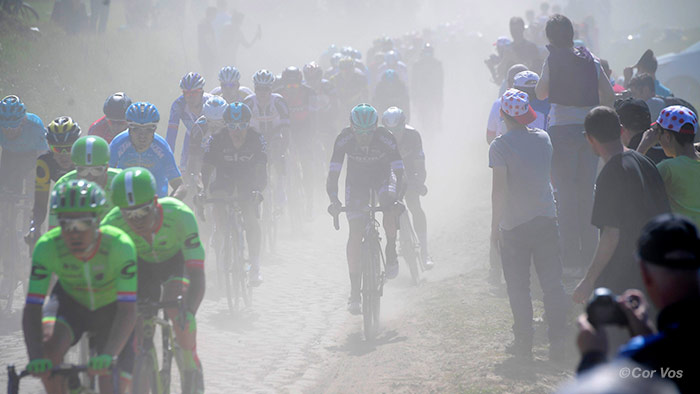 An in-depth look at the performance of two of the top world tour riders, Mathew Hayman of ORICA-SCOTT and Dylan Van Baarle of Cannnondale-Drapac, at Paris-Roubaix— one of the world’s most famous cobbled classics.

With Paris-Roubaix completed for another year and the excitement of the cobbled classics now behind us, we have the very fortunate opportunity to look at the Roubaix files of two of the top riders on the 2017 UCI WorldTour circuit at either end of the age spectrum.

First we have the 2016 winner and veteran pro Mathew Hayman (Aus) of Team ORICA-SCOTT, who finished this year in a fantastic 11th place only 12 seconds down on eventual winner Greg Van Avermaet (Bel) of the BMC Racing Team. We have also compared his 2017 stats from that of his 2016 win, and as you will see below we found some interesting conclusions about just how hard of a race he fought this year.

Next, we have the face of the new generation of classics contenders, Dylan Van Baarle (Ned) of Cannondale-Drapac. Van Baarle finished in the same group as Hayman, just 12 seconds down in 20th place. This came on the heels of his fourth-place finish in the Tour of Flanders, again cementing his pedigree in these northern classics.

The Demands of Paris-Roubaix

There are several things to note about the conditions Paris-Roubaix is raced on, and how the 55 km of pavement and other road conditions along the route can affect the power and force applied by the riders. A key physiological demand to note is how power is produced and force applied by the riders as they cross the flat cobbled sections at full speed. When we compare riding a two-to-three minute effort at a high intensity on a normal surface to that of riding on the cobbles of Roubaix, we see massive differences in how the force is applied. It requires riders to engage many more muscle groups and adapt their posture and position on the bike comparative to normal surfaces. The requirement to do this repetitively (over the 29 sections of cobbles) takes a major toll on the body as the rider’s ability to recover is reduced. Over the course of the race, the consistent jarring and impact of the cobbles impairs the rider’s ability to maintain a higher power/force. We have seen over the years that riders who have the ability to absorb this jarring and punishment over the course of the race are those who are fighting for the win.

Unlike other classic races, Paris-Roubaix is “on” from the start, both for the domestiques and for the team leaders. Unlike many other classics, we see the essential requirement is to be in the fore and out of trouble at the start of the race. This leads to massive energy expenditure in the early part of the race, which means that only the true endurance athlete and one who can take both aerobic and muscular punishment for roughly six hours will be a contender at the end. This is seen easily in both Hayman’s and Van Baarle’s data:

What we would normally see in the first two hours or so of racing in some of the bigger classics is the team leaders (or those which need to be at the front come the final 80 km of the race) have around 2.5 to 3W/kg during this time. It is plain to see the effort required to be close to the front. This was a particularly fast start to Paris Roubaix, with an average speed of 50 kph being set in the first hour. The 2017 edition is the fastest ever recorded, with an average speed of 45.204 km/hr for the 257 km and five hours and 41 minutes it took the eventual winner. However, this sort of effort is common for this race regardless of the favorable wind.

Not only was the power consistent throughout the first half of the 2017 race. but Hayman even produced his peak five-minute power on the Noyon Climb which is only 20 km into the race. On this climb Mathew produced 411W, 4.95 W/kg on the 2.6 km ascent (which is only at a 2.5 percent gradient). The attacks were coming thick and fast at this stage for riders to gain a place in the early break. This early move was not formed until just before the first cobbled sections at 96 km into the race which consisted of only three riders who stayed out front for 67 km.

The Fight to Trouée d’Arenberg

With one of the most iconic stretches of road on the horizon, the Arenberg is known for its ferocious cobbles and unforgiving surface, which has ended many a rider’s dreams of winning (or even finishing) Paris-Roubaix.

The lead up to Arenberg is both nervous and aggressive as both the riders and teams fight for a place near the front. Unfortunately for Hayman he had a puncture about  23 km before the Arenberg forest, which led him to embark on a ferocious chase to regain contact with the main group of contenders. Hayman managed to regain contact with the main bunch with some 8 km to go to the start of this section, but it meant a big effort to get back into the bunch. It was during this space of time which Hayman gained his peak 20-minute power for the day.

What is even more impressive during this period is that the effort was far from a consistent power, the roads, cars and other riders which covered the narrow roads as Hayman fought to get back on meant he had to make some big variations in his effort. During this time  Hayman did 10 spikes over 850W,  hitting a max of 1272W. So he made 10 efforts during a 19 minute period of 10.3W/kg to 15.33W/kg just to regain contact to the bunch, and he had not even hit the Arenberg yet. This would have taken a big chunk of energy to get back into the fight with this sort of effort.

From Van Baarle’s file we can see a real hard section just as he jostled for position at the head of the main group. In the last kilometer leading into this section,  he averaged 516W, maxing out at 1288W and averaging nearly 53 kph. Hitting the stones at this rate would have needed the best of bike skills to keep upright and in position.

The Front of the Race Splits Apart

As the race moved into some of the heavier cobbled sections of the race the favorites started to put their cards on the table and began to force some selections. The Trek-Segafredo team made a move on the Hornaing-to-Wandignies cobbled section causing a selection near the front. Van Baarle was among the first seven riders, which included Peter Sagan and Van Avermaet, but Hayman was on the wrong side of this split along with Tom Boonen.

This section of cobbles was the start of a hard section of the race, and saw Van Baarle hit his peak 30-minute power over the coming cobble sections as he fought to keep his and his teammate Sebastian Langeveld (Ned) near the front. Langeveld went on to finish a fantastic third place.

During the 30 minutes Van Baarle averaged a Normalized Power of 384W (4.92 W/kg) for the 22 km he travelled in this time. Even after such a hard section of the race, Van Baarle was still in an aggressive mood as he attacked the chasing group. This group consisted of most of the favorites who were in pursuit of the Daniel Oss & Company. Between the Orchies and Auchy-lez-Orchies to Bersée cobbled sections, Van Baarle attacked and made a 4.5-minute effort at 438W(5.62W/kg), but he was quickly followed by Matteo Trentin and Sagan.

With another big section of cobbles looming—the 3 km of Mons-en-Pévèle—the big favorites were eager to make some selections stick. Sagan decided it was this section of cobbles that he would test the others, but again Van Baarle made the front selection as he can be seen at the front closing the gap to Sagan. So what does it take to close a gap to Sagan on the cobbles?

You can see with the time to complete this section that Hayman had some ground to gain back on the tarmac. Fortunately, he had teammate Jens Keukeleire in the front keeping ORICA-SCOTT represented.

As the Arenberg is a decisive section at the earlier part of the cobble sections, so is the Carrefour de l’Arbre as they approach the final 20 km. It was on this section last year that Hayman put up a heroic fight to stay in contention when Boonen was trying to break him. This year this section was again decisive. It was here that Van Avermaet split the leaders to take the front selection down to three riders. Boonen also forced the pace behind as he tried to regain a 30-second deficit. This was also when Sagan lost his place at the front of the race. Both Van Baarle and Hayman were in the chasing group while all this excitement was going on just ahead of them.

The view of the Roubaix Velodrome must be a welcome sight for all, regardless of their race position. With a top-20 place at stake and the group including Hayman and Van Baarle going for sixth place— there was still a sprint to contend. Mathew pulled out a huge effort again to kick out at 641W average power (980W max power) for the last 400m. His ability to do a 7.72W/kg effort for nearly 30 seconds after already 257 km and five hours and 40 minutes of racing is impressive. The performance for the reigning champion was a fitting end for this veteran of the cobbled classics. Along with Van Baarle’s massive ride during the race, which saw him near the front for most of the hard sections, ultimately enabling his teammate Langeveld to podium.