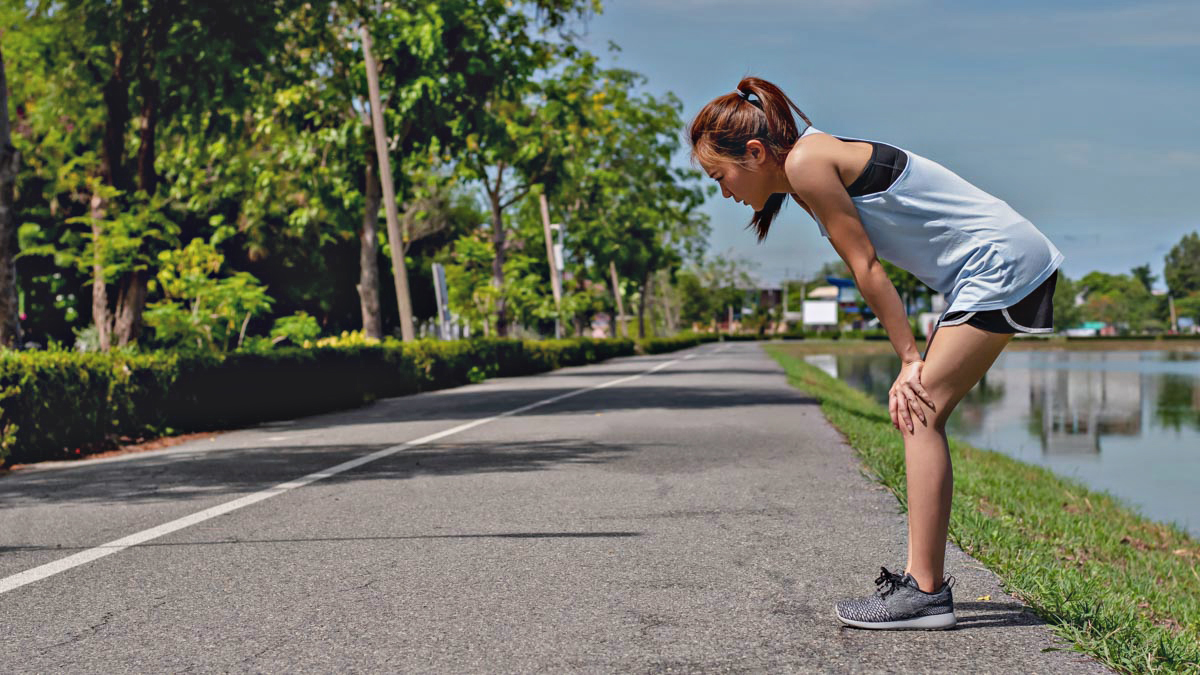 Got an athlete who pushes it way too far, or perhaps one that always gripes about suffering? It’s time for them to get in touch with their pain tolerance.

How many times have you heard a fellow coach spout some trite cliché like, “No pain, no gain”? Or watched a sports movie in which going hard is equated with throwing up during a training session? It’s become a cultural norm to equate hard work and determination with painful suffering that athletes have to endure to reach their goals. While there is some truth in this, it’s all too easy for the members of your training group to take this line of thinking too far and end up injured, burned out, overtrained, or all three. In this article, we’ll take a fresh look at pain tolerance and try to help you better balance your athletes’ training so they can gut it out when necessary without pushing too far into the pain cave.

Why Do We Feel Pain?

At its most basic level, pain exists as an evolutionary defense mechanism that’s designed to perpetuate our survival and to warn us when we’re under threat or have been harmed in some way. Yet the problem with pain is that it’s a lagging indicator, meaning that some damage might have already been done either by ourselves or an external stimulus before we get a pain signal to alert us to the issue. This is why it’s not always enough to just tell your athletes to stop if it hurts (or, on the contrary, to just dig in when they start to hurt).

Another challenge is that during physical exercise, the brain releases a cascade of chemicals that serve to both blunt pain and produce a feeling of elation. Dopamine, norepinephrine, serotonin, and other neurotransmitters make your athletes feel good while also reducing their feelings of fatigue and, to some extent, mitigating their perception of pain. In some ways this is a good thing, as this chemical cocktail keeps them moving when things get difficult. But on the flip side, it can also make it risky to advise your athletes to wait for a pain sensation before deciding to slow down or stop.

Pain and the Novice

When you’re training a novice athlete, the good news, as my Unplugged co-author and Cal State Fullerton muscle physiologist Dr. Andy Galpin often says, is that “everything works” for at least a while. That’s because when their body is untrained or detrained, it’s going to respond positively to just about every training stimulus you throw their way (unless you do something really crazy to prompt a negative response). However, on the other side of the coin, the inexperienced athlete is also at a disadvantage because they’re likely to get sore more easily, and due to their lack of experience, it will be difficult to tell whether that’s because they’re just doing something hard that they haven’t done before or have pushed themselves too far. And as a coach, it’s equally hard to make this call for them as you don’t yet know what their limits are.

In this case, it’s going to take time and careful exposure to different kinds of training to be able to tell the difference before an athlete challenging themselves and overtraining. If they’re a rookie or are returning to sport after injury or a period of inactivity, their capacity will build back up quickly and, per the SAID (Specific Adaptation to Imposed Demands) principle, their body will respond to training stimuli in a way that eventually makes certain sessions hurt less.

Assuming they’re not going too hard or fast too soon and that they’re recovering adequately, the amount of acute post-training pain and DOMS (Delayed Onset Muscle Soreness) should decrease as they settle into the regular routine of the program you provide. Perhaps just as importantly, their mind will get better at distinguishing between an acceptable level of discomfort that they should try to push through and warning signals to stop that they need to heed.

It’s worth sharing with your athletes that different sessions will produce varying kinds and levels of discomfort. Lung-busting hill repeats are one thing, while the slow, insidious creeping of fatigue that comes on during a longer, slower effort is another. Longer intervals or middle-distance pieces might deliver a combination of both. To help build your athletes’ overall pain tolerance, make sure they’re following a well-rounded training plan that incorporates varying volume, intensity, and density demands so that they learn to handle and better understand their pain responses across the board. Recognize that while they’ll probably never do all-out intervals that don’t hurt, they can learn to embrace the challenge faster, more intense sessions present. Or if they respond better to power training, that longer sessions might take more out of them.

The Importance of Mindset

If some of your athletes have been training and competing for a long time, the chances are that they’ll be less sensitive to pain than a newbie and have come to know the difference between necessary and excessive suffering. This isn’t merely conjecture. A study published earlier this year in Frontiers in Psychology concluded that, “Elite and high-level athletes had increased pain tolerance, higher heat pain thresholds, and reported lower pain intensity to thermal stimulation.”

Interestingly, the authors noted that increased pain tolerance wasn’t merely a physical phenomenon but was closely tied to participants’ mental approach. Those who had a greater fear of pain had a lower tolerance to it, meaning that the manifestation of how much they hurt was a self-fulfilling prophecy. The researchers also noted that those who displayed a higher level of grit got further through physical tests than those who weren’t as determined.

In his bestselling book The Champion’s Mind, Dr. Jim Afremow writes, “As long as you are not damaging your health or risking (or aggravating) an injury, you just have to learn how to dig deep and find that last high gear to move into so you can motor through the wall or beat the bonk.” And just as your athletes’ cardiovascular and musculoskeletal systems will build up pain tolerance on the physical side, so too will hard training galvanize their mindset and help them become mentally tougher. Sometimes harder sessions provide just as much psychological as physical value.

When to Push vs. When to Stop

While mindset is crucial when it comes to pain tolerance, it’s also vital that you teach your athletes to listen to what their body’s telling them and at least hear themselves out when they start hurting, rather than simply resolving to keep going no matter what. Dr. Kelly Starrett, founder of The Ready State, says that, “If it feels sketchy, it is sketchy and you need to stop.” What he’s talking about here is acute pain. His fellow physical therapist Dr. Gray Cook, co-creator of the Functional Movement Screen (FMS), puts it this way, “I’m not talking about skipping a workout on a day when your muscles are sore or tight. We’re talking about sharp stabbing pain, dull aching pain, or pain associated with redness and swelling. If you push against that type of pain, it’s going to push back. It’s going to push back harder and it’s going to win.”

So if one of your athletes feels like that before a training session, advise them to skip it, consult a doctor, or both, and focus on some mobility work or take a hot soak instead. If such pain comes on during a workout, suggest that they slow down and if it continues or intensifies, to stop. Often, an athlete will feel mere discomfort or fatigue in both legs or arms (or maybe throughout your entire body), whereas prohibitive pain will usually manifest on one side or in a specific joint or muscle. If it’s the former, advise them to sit with the sensation for a while and see if it dissipates or remains at a tolerable level. In which case, tell them to try to keep going and remind themself that they’re tough and resilient enough to handle it. But if they feel a lightning bolt strike in their hamstring, back, or elsewhere or their pain escalates, tell them to call it a day because in this case, pain won’t lead to gain.

About Phil White
Phil White is an Emmy-nominated writer and the co-author of The 17 Hour Fast with Dr. Frank Merritt, Waterman 2.0 with Kelly Starrett, and Unplugged with Andy Galpin and Brian Mackenzie. Learn more at www.philwhitebooks.com and follow Phil on Instagram @philwhitebooks.
#COACHING#PHYSIOLOGY#SCIENCE