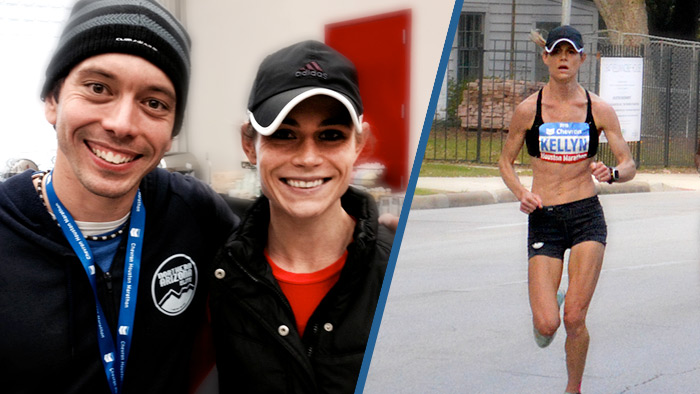 Northern Arizona Elite’s Kellyn Taylor ran the sixth fastest debut marathon for an American female last weekend at the Houston Marathon. Her coach Ben Rosario breaks down the training that lead to her amazing day.

For a coach, there is nothing better than when an athlete absolutely rocks a race. Northern Arizona Elite team member Kellyn Taylor running 2:28:40 in her marathon debut certainly fits that bill. I’ll give you a little recap of my view of the actual race first and then I’ll get into the nuts and bolts of what she did in training that allowed her to run so fast on race day.

The day of the race I was pretty nervous because not only was Kellyn running the marathon, but another Northern Arizona Elite athlete, Matt Llano, was running the USATF Half Marathon Champs as well. I try really hard not to show that nervousness to my athletes. It’s my belief that giving off a calm and confident vibe is important. Sitting in the warm-up tent with them though, I honestly got less nervous and more excited. They both seemed genuinely relaxed and confident. Both of them are such great competitors so the bigger the stage the better for them. This was definitely a big stage.

About 20 minutes before the race I took off down the road and ran down to the 3.5 mile mark. I met up with my wife and daughter and Matt’s parents. We watched Diego Estrada come by first with Matt, Meb Keflezighi and the rest of the lead pack about 10 meters back. Then we waited for Kellyn. She passed by right at 17:30, which meant she was right on 2:27:30 pace. She looked great, but you should look great 3.5 miles into a marathon! I saw Matt again at 10.5 miles or so and he was in a tight battle for third. I screamed my head off and then headed out toward the 20 mile mark to see Kellyn.

Technology is a wonderful thing of course so I was able to get the update that Matt had finished 5th as I ran backwards on the marathon course. I was also getting Kellyn’s 5k splits and they were awesome. Check out all of her mile splits and more by looking at her TrainingPeaks race file. As I stood at the 20 mile mark I watched the clock. I knew if she crossed around 1:52:20 or so that she was still firmly in the 2:27 pace range. I can’t remember what it was exactly, but it was close. Plus, much more important than that she looked great! I jogged along the sidewalk as best I could as she sped away and could tell that she hit 21 still rolling along. I spent the rest of my 5 mile walk/jog back to downtown Houston checking splits come in via text and talking to my buddy Carter Snow who was giving me updates. I think I was at about 23 when I heard the good news that she had finished in 2:28:40. I got a little emotional actually. Training for the marathon is just such a grind. I knew how much work she had put in and I was incredibly proud of her.

So enough of that…let’s talk training! First of all you can check Kellyn’s entire training segment by checking out her training log. We keep it pretty simple. The Houston segment began in earnest on Monday October 27, after two super easy weeks following her fall season. For the most part, we used a 9-day cycle the entire way. The cycle went something like this: hard-easy-easy-hard-easy-easy-long. The long run almost always had some sort of hard aspect to it; be it a long steady state, a fast finish, etc. The hard workouts early on were a little speedier, partially because we like to get more race specific as a segment goes along and partially because she did run the US 12k Championships a couple weeks into training.

One of the first tests was on November 26th where she ran 15x1k with one minute rest down in Camp Verde at 3,500 feet or so. It’s sort of a weird altitude so figuring out the conversion is tough. I wanted these at half marathon effort so I wanted her to try 3:25. She ran the first couple in 3:20 and looked super easy so we ran with it. She hit pretty much all of them at 3:20 or just under, which is 1:10 half marathon pace. That pretty much sealed what I already knew- that Kellyn was going to be really good at the type of training it takes to run a good marathon. Her very next workout was 12 miles at marathon effort back up in Flagstaff. Goal was 5:55 which converts to roughly 5:38 at sea level (2:28:00 pace). Of course, in typical Kellyn style she was a little too fast and averaged 5:48 pace. I was disappointed she failed to be patient, which you need in a marathon, but pleased that she could run 5:48’s and feel controlled.

We then took a scheduled rest week to recharge a little bit before the homestretch. I think easy weeks are super important to avoid that stale feeling that sometime comes from a prolonged stretch of training with no break. Coming off of the rest and feeling pretty fresh she rolled the Tempo/Long/Tempo workout that we like to do. It’s a 4 mile Tempo Run, a 10 mile run, and then another 4 mile Tempo Run. She hit both tempos around 5:35 pace and she averaged sub 7s for the 10 miler, all at 7,000ft. If I’m remembering right this was the workout where I told her, “Okay I believe you. You can shoot for 2:27 pace at Houston.” Before that I was leaning toward being a little more conservative, but the numbers were telling us she was in super shape so I figured we might as well go for it!

I’ll fast forward a little bit to three weeks out when she ran 16 miles at marathon pace. That’s a big one and she killed it. She was at sea level visiting family, which was nice because we were able to try actual pace as opposed to converted effort. She was shooting for 5:36-5:38. She had a couple of quick miles early that sort of skewed the overall average but she settled in and did a really good job for most of it. She closed her last mile in 5:28 just because she felt so good and that also lowered her average. The final tally was 5:33 pace for 16 miles. At that point I knew she was ready to run a huge race in Houston.

She did have one big workout left, 2×6 miles, which we did 15 days out. That went well also and except for a little flare-up in her ankle and her glute/hip the last week, it was pretty much smooth sailing. A huge shout out to Dr. AJ Gregg and massage therapist Stephanie Del Giorgio for getting her past those issues. So again, check out Kellyn’s entire training log to see exactly what she did over these last 12 weeks.

I hope you enjoyed this recap. We love sharing everything with you guys. Hopefully you can use some of the things that we do to help you in your own training.

About Ben Rosario
Ben Rosario is the head coach of Northern Arizona Elite, a professional distance running team in Flagstaff, Arizona. The team has won multiple National Championships and produced world class times including a 1:01 half marathon (Matt Llano), a 2:12 marathon (Jordan Chipangama) and a 15:21 5k (Kellyn Johnson). Ben's accomplishments in the running industry include co-founding Big River Running Company in Saint Louis, Mo., directing the USA Cross Country Championships in 2012 and 2013 and directing the Nike Festival of Miles charity track meet. He has also created NAZ Elite training plans to help runners of all abilities. 'Follow NAZ Elite on Twitter: @NAZ_Elite and Coach Ben at: @BenRosario1
#RUNNING