It’s OK, You Can Eat That

Most of the year athletes maintain a strict diet, eat only healthy foods and even count calories. This keeps you lean and fast, but from my experience, I know it can also add stress to your already stressful lifestyle. 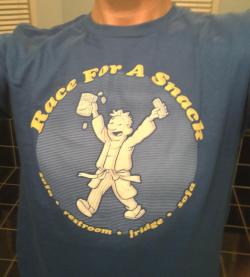 Most of the year athletes maintain a strict diet, eat only healthy foods and even count calories. This keeps you lean and fast, but from my experience, I know it can also add stress to your already stressful lifestyle. The off-season is a time to put your body and mind to rest. Relaxing that belt also helps you relax your mind, and will help you start the season mentally fresh.

As a former fat guy who weighed in at 250 pounds before discovering this triathlon thing you could say I still like to eat. In fact most of my friends, family and colleagues all believe that the only reason I am a triathlete is so I can eat. They are partly right. I think it was Braveheart who said “You can take my fat but you can never take my appetite!” or something along those lines.

In season I eat very smart and follow a pretty strict diet and tend to hover around 165-170 pounds which for me seems to be a good balance between weight, speed and power. I’ve found over the last year that gluten-free and dairy-free diet has helped me rid myself of any GI issues I had in training or on race day and even helped me get a little leaner. It is tough but the trade-off between not eating those yummy, gluten-y, cheesy, creamy, delicious foods and not crapping my pants during a race is worth it to me. The only cheat that works for me is french fries. They are gluten-free, guilty and delicious. They are also made with vegetables so they must be (a little) healthy.

With my last race of the season being this past Sunday, it is now the off-season. Time to run when I want too, swim if I have to, and ride my bike more than I should. And eat. But not too much…

The off-season for me means my diet goes away and while I don’t go ballistic and eat my way into a hole, I do indulge in some of those items I have been resisting all year. Matt Fitzgerald has written a few articles (including “How Much Should I Weigh” on TrainingPeaks) and a book on racing weight where he has stated that gaining a few pounds in the off-season is natural. Think about it, you aren’t training as much, you aren’t as focused on your diet and it is a good mental break to eat what you want. But I wasn’t always this relaxed in the off-season.

When I first lost the weight I was always worried that I would gain it all back. Even today I still obsess over it at times. In fact the idea of gaining the weight back was why I first signed up for a 70.3. Myself and a group of friends had gotten back into shape, lost some weight over the summer and were looking for something to motivate us to keep it off. The 2010 Ironman 70.3 Muskoka was that motivation! 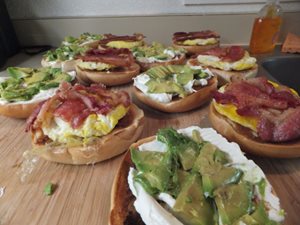 The worst thing I did that year was buy a scale. A fancy body fat scale. Yes it is a good motivational tool when you are losing weight, but for me it was the opposite in that it made me obsess about gaining weight. I realize now that it is all in my head, but I would see I gained a pound and that would be put me in a bad mood. I didn’t want to go back to being fat Rodney, but all that mental and physical anguish isn’t healthy either. Today I realize that the off-season only lasts a few short months, and I’ve learned to accept it’s OK to gain a few pounds knowing that I’ll lose them quickly when I start up again.

In Matt’s book Racing Weight: Quick Start Guide, he talks about “the 8% rule”. The 8% rule says that in the off-season it is healthy to gain up to 8% in body weight. To me that still seems like a lot – even with my “leveler” head these days I think I’d be pretty pissy if I gained 10-12 pounds in a few months. At the same time, it did give me a reasonable “goal” to stay under 180 lbs in the off-season.

Give The Mind And Body A Rest

Today I find it as important that I give my mind a rest as it is that I give my body a rest. I’ve found that forgetting about following a diet is one of the big things that gives my brain a break and prevents mental burnout. So for now I’ll put down that smoothie, loosen the belt a notch and enjoy the time with friends, the social rides and runs, and just as importantly the delicious foods that we all restrict ourselves from when it’s go time!

I’d love to hear what you think – how do you balance giving yourself a “mental break” during the off-season and making sure you’re on point to get to racing weight in the spring?

About Rodney Buike
From fatman to Ironman, TrainingPeak Ambassador Rodney Buike has been on a journey that has taken him from a 250 lb. couch potato to a lean, not so mean, triathlete. In 2009 Rodney got motivated to become active again after a long hiatus when a friend was paralyzed in a mountain biking accident. Soon Rodney was hooked, losing weight and looking for a reason to keep off the weight over the coming Canadian winter. He looked into triathlon, and Muskoka Ironman 70.3 seemed 'reasonable'. After completing his first Sprint triathlon, Rodney went on to a 5:30 finish at Muskoka and has gone on to finish three half iron distance races as well as Ironman Lake Placid. Rodney is gunning for a 70.3 World Championship slot in 2012.