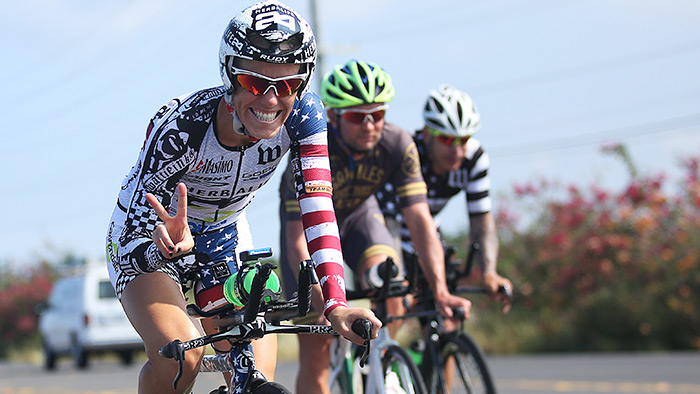 After a third-place finish in 2016, this former hockey player is ready to give it her all in Hawaii—and she’s assembled the right coaching team and strategy to make it happen.

By all accounts, pro triathlete Heather Jackson is poised to become the first American woman to win the IRONMAN World Championship since 1996. Her third-place finish last year sent a message to her female competitors that she was one to watch at this year’s race.

The Princeton hockey team captain and former Team USA track cyclist is known for her fierce competitiveness, huge smile and punk-rock look. Indeed, she and her husband, Sean “Wattie” Watkins, have segued her edgy style into a highly successful clothing brand and racing team, Wattie Ink.

After her fifth-place finish in 2015, Jackson amicably parted ways with her coach of three years, Cliff English, and began training under the guidance of fellow pro (and fellow Wattie Ink teammate), Joe Gambles. The fresh take on her training proved to be a smart move—she went on to crush the IRONMAN Lake Placid female course record in 2016 in a time of 9:09:42 and followed it up with her bronze-medal performance in Kona in a time of 9:11:32.

Like any other athlete, professional or not, Jackson admits that moving on from one coach to another wasn’t a decision she took lightly. “After my fifth-place finish in Kona in 2015 I just really struggled to get motivated after the off-season,” she says. “It just came down to needing something new—new stimulation. But the consistency of being with the same coach and being able to mimic things that worked was hard to let go of, I mean, I was seeing year-after-year progression, but I just realized that I had potential in Kona—it came down to a serious need to improve my swim and my marathon.”

While back in her training base of Bend, Ore., Jackson started swimming with Gambles while he was in town for a week rehabbing from a running injury. “He immediately gave me 10 things to work on, different drills and it just kind of started as a swim program at first,” she says. “But after the 2016 Oceanside 70.3 we just decided to make it official—it just felt right.”

Watkins admitted that trusting in Gambles at first was kind of an unknown as he was a professional athlete, not necessarily a coach. “But he’s just so smart and he works with sports-specific coaches back in Australia and that’s been hugely helpful for Heather to get that specific instruction for both her swim and her run.”

Watkins was immediately impressed with the confidence Gambles instilled in Jackson. “Take for example, Kona. I mean, that hour before the start can be a pretty tense time,” he says. “And I watched as Joe would come up to Heather and just say all the right things and he kept her calm. I just sat back and was like, ‘This guy is a great coach.’”

Gambles, known for his speed on the run, has a casual confidence to him that both Jackson and Watkins agree has been a huge influence on her believing in her racing abilities more than ever before. “When I tell him I was able to stay with the lead girls in a swim, he’ll just turn to me and say ‘Yes Heather. You should always be up there with those girls. Why are you surprised?’ and I’ll be like ‘Oh! Okay, you’re right!’”

Having a coach who is often doing the same race as Jackson, and at the pro level, has been an entirely new experience and rewarding in many ways. “It’s helpful to be able to explain how I struggled through a certain section of a race course and have my coach totally understand because he was riding it too,” she says.

In addition to helping Jackson with her swim and run, Gambles also introduced her to the world of bike power and other important training metrics. “I had never really ridden with a power meter,” admits Jackson. “And it’s been interesting. I don’t obsess over the numbers, but I like that it’s something to look at to gauge how I’m hitting my efforts. And Joe looks at all of it and really dials into my heart rate and power and everything else.”

Jackson has also started tracking metrics like Heart Rate Variability (HRV) and SpO2 (oxygen saturation levels) using the Masimo MightySat Pulse Oximeter, which uploads directly to her TrainingPeaks account. “It’s just another confidence booster,” explains Jackson. “It lets you know if that fatigue you feel is really there, so you can rest when you need it or even just understand why some of your workout stats were lower than you wanted them to be. And it gives Joe another metric to look at so he can get the full picture of my training.”

While in 2016 Jackson raced IRONMAN Lake Placid in late July, this year she raced IRONMAN Boulder in early June, giving her extra time to recover and then rebuild for the Big Island. “When I raced Placid, I really wanted to win,” she explains. “I mean, I grew up playing hockey there and it meant a lot to really do well. But this year, everything I do and every race I go to, it’s all with Kona on the horizon. Everything I do this year is with October in mind.”

About Susan Legacki
Susan Grant Legacki is the Content Director at TrainingPeaks. The founding editor of LAVA Magazine and a former editor at Triathlete Magazine and Inside Triathlon, Susan is an IRONMAN finisher, Boston Marathon qualifier, USAT Level 1 Triathlon Coach and certified Pilates instructor. When she's not editing or writing copy about endurance sports, you can usually find her training for them around Boulder, Colo.
#IRONMAN