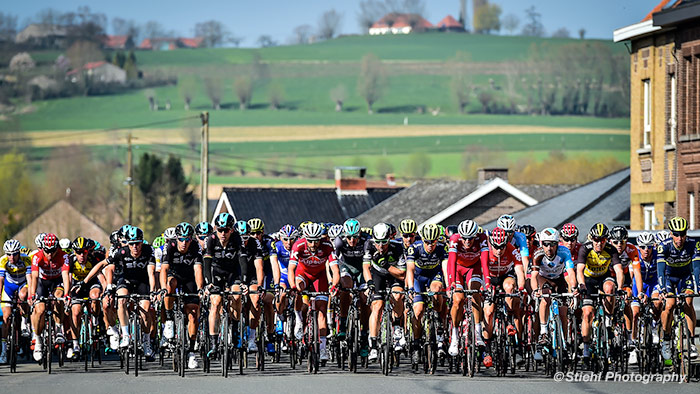 Team ORICA-SCOTT rider Luke Durbridge showcased his impressive climbing, sprinting and time-trial abilities while battling it out for a fourth-place finish in the 2017 edition of the E3-Prijs Harelbeke.

The 2017 E3-Prijs Harelbeke was set to be a showdown with all the major spring classic performers gathered under sunny conditions to race 206 kilometers around the iconic Flemish Hills. The 2017 edition was widely seen as one of the hardest in recent years due to the intensity of the race right out of the gate.

We had the privilege to look at fourth-place finisher Luke Durbridge of ORICA-SCOTT’s power file and analyzed the effort and power needed to make it at the front of such an iconic race. Upon finishing the race Durbridge was adamant that the intensity had surprised him all day long. “You can’t go much deeper than that, eh. You don’t go much deeper than that,” he said. “I went absolutely to my unbelievable limit. It was a hard day.” When a rider of this caliber says that he “can’t go much deeper,” you know it truly was an epic day in the saddle.

Some of the GPS data has not been transmitted properly which leaves the speed and distances on the analyzer difficult to track, but the power, locations and time of the efforts are all there to be seen. Now, let’s see what it takes to be a classic rider powerhouse.

To view Luke Durbridge’s SRM file click the image below:

Overall Stats for the Race

The start to E3 was exceptionally hard compared to both previous editions and other 2017 classics. The main reason for this is because the early break was not formed until the second hour, which generally means that in the period until the break is formed there is aggressive and fast racing from the riders and teams wanting some early glory and needing to help set up the race for the main contenders later in the day. Because of this the race was averaging 40 kph for the first hour and 45 kph in the second hour—there was no relaxing in the first part of the race for anyone. This can be seen in Durbridge’s data during the initial 80km:

If we compare this to other races we have seen in the 2017 season, protected riders such as Durbridge would expect to be around 3 to 3.5 W/kg average in the first part of the race before the fireworks kick off. From this we can gather that many riders hit the hills with more fatigue than they would have liked. This may have played into the hands of a rider such as Durbridge, with his big engine and ability to churn out high power for hours on end I expect that he will have felt the fatigue less in this initial two hours than other contenders.

The real climbing starts around the 93 km point, this is noted with the ascent of “La Houppe” climb and it is succeeded with the “Oude Kruisberg,” “Knokteberg,” “Hotondberg” and “Kortekeer,” which take place along a 36 km stretch. During the period Luke was well protected by his ORICA-SCOTT teammates keeping him in position close to the front and out of harm’s way. During this period Luke normalized 341W and 4.38 W/kg but within this he had four climbs to tackle which lasted between two and five minutes.

Within this section you can see that the climbs required Durbridge to ride around 5 to 5.5 W/kg for a duration lasting between two and five minutes. This can be seen as Durbridge riding within himself to maintain position and keep his power ready for the fight which lay ahead.

The Taaienberg climb has traditionally been the place where the big guns start firing, and this year’s addition did not disappoint. At this point, the lead break was around three minutes in advance with a small group of three between that and the main contenders. On the approach to the Taaienberg climb the pace was increased by the Quick Step Floors team setting a fast pace to hit the climb at full gas. The twisting roads leading to this hill make positioning crucial, unfortunately Durbridge found himself a little farther back than what he may have liked with him sitting around 20th wheel from the front of the peloton as he hit the slopes of the Taaienberg. In the 1.2km before the climb Durbridge averaged 469W at 47 kph, what is interesting is that within these 90 seconds he had to do two, 10-second efforts of between 800W and 900W. This was due to the pace which Quick Step Floors had set along with the desire to maintain and increase his position toward the front of the peloton before the climb. This is a true trait of a classics rider being able to hit short, neuromuscular efforts and then still being powerful enough to kick out a high, prolonged VO2 effort within close succession. One other important observation to note, up until this point (where the real race for the win is about to start) Durbridge had accumulated a 200 TSS. This means he needed to be at his best after hitting an already very high TSS score. Something us mere mortals should find both impressive and exceptional.

On the Taaienberg climb Durbridge rode the 700 meters (9.5-percent average gradient) at 500W average, 6.38 W/kg. At this point Tom Boonen and Daniel Oss (of Quick Step Floors) opened the gas and split the group leaving Durbridge in a chase bunch as they fought to regain ground on the 20 or so select riders who now formed the front bunch. Over the top of the Taaineberg climb and onto the approach to the Boigneberg climb Durbridge rode at 370W for around eight minutes as he fought to keep within striking distance of the lead group. This was a critical time for Luke as the requirement to make the junction to the leading favorites, which were now around five to 10 seconds in front, was critical.

The lead up to and on the Boigneberg climb saw Luke produce his peak power for the day on durations between 20 seconds and six minutes. This was all due to his massive effort to bridge the gap to the leading select group which included Philippe Gilbert,  Greg Van Avermaet, Oliver Naesen and Lukas Pöstlberger. Durbridge made this bridge with Sep Vanmarcke (Bel) of Cannondale-Drapac and it clear they dug very deep:

To make things just the little bit harder and more painful, within 10 seconds of Durbridge bridging the gap to the leading group and having a very short rest, he then produced his peak 10-second effort as he fought to stay on the back of the leading group when Van Avermaet accelerated out of the corner to keep the pressure on to open the gap to the chasing riders. For these 10 seconds full of pain, Durbridge produced an average power of 980W (12.5 W/kg) maxing out at 1,172W (15.02 W/kg) for the 10-second effort. This is not something you would normally like to do after having already produced his peak one-, two-, three-, four-, five- and six-minute powers in the lead up to this sprint. Ouch!

After the Boigneberg climb the race was well and truly on, with the lead break established and everyone riding to their maximum. During this extremely hard period the riders tackled some of the hardest climbs of the day. This section had them hit Eikenberg, Stationberg, Kapelberg and Paterberg climbs in quick succession and all within 20 km of each other. The rise in power and effort is noticeable during this section compared to the early climbs that met the riders before the big selection was made. On the first climbs in the race Durbridge was riding approximately 5W/kg to 5.5 W/kg. On this section of climbs he was having to sit between 6 W/kg and 7 W/kg.

Between these climbs Durbridge was riding between 330W and 350W (4.2 W/kg to 4.5 W/kg), which was needed to take turns with the leading riders in the world as they rode hard and committed to keep the gap to the chasing bunch (led by Quick Step Floors) as they approach the Oude Kwaremont.

With the iconic climb of the Oude Kwaremont looming, this was to be the showdown that was to play out the final selection. The climb was hit with ferocity as Oliver Naesen (Bel) AG2R La Mondiale forced the pace which was to be too fast for Durbridge to remain with.

Having lost contact on the slopes of the Kwaremont, Durbridge put in a massive effort over the top of the climb, where they were met with a cobbled section. Here Durbridge rode at 422W (5.38 W/kg) for four and a half minutes as he tried to regain contact with the three leaders (Gilbert, Naesen and Van Avermaet). Unfortunately, this effort was not enough to regain contact. The next 36 km to the finish was going to be painful if they were to keep the distance on the chasing bunch.

Fighting to the End

With most of the climbs behind them and mostly rolling terrain toward the finish in Harelbeke some 26 km away, Durbridge was to use his incredible time-trial ability to keep within two minutes of the leading trio and maintain a gap on the chasing peloton as him and Pöstlberger (Aut) Bora-Hansgrohe rode hard to fight it out for fourth and fifth place.

Stats for the last 26 km (after already some 180km of all-out racing):

After the race Durbridge had this to say of these last 26 kilometers, “I literally couldn’t close the gap. I tried for 30 kilometres but I couldn’t close it.”

This was a massive effort to keep a consistent effort through these last 35 minutes of the race,  having already put his body to the max during the previous 180km. The finish saw Durbridge beat fellow breakaway companion Lukas Pöstlberger in a sprint to the line. Both riders were at the end of their powers, however Durbridge had enough energy to do one min at 413W (5.26 W/kg) as he approached the line to take fourth. This was a battle fought hard to the end.

E3-Prijs Harelbeke is known as a “Mini Tour of Flanders” but it is very much a classic in its own right. With this in mind and with only a matter of days before the Tour of Flanders is played out across the hills of Belgium, the riders who made E3 so thrilling will be the same players who will make the Ronde Van Vlaanderen so speculator. Who would bet against Luke Durbridge fighting it out for a podium with the early season form he has shown in recent weeks?