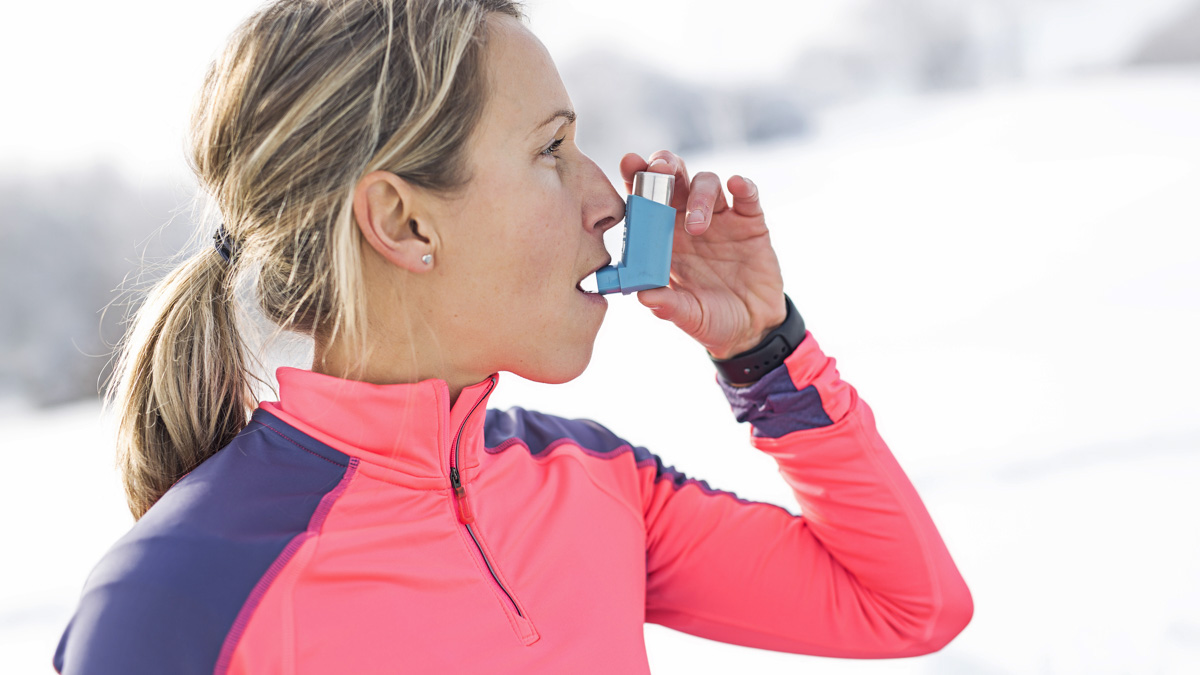 Several long-accepted truths about athletes with asthma have been debunked and it’s on us, as coaches, to provide training that best serves these athletes.

Asthma is a chronic respiratory disease characterized by inflammation and increased responsiveness of the muscles lining the small airways resulting in airflow obstruction and gas trapping in the lungs. Symptoms of asthma include cough, wheezing and increased sputum production. Asthma is one of the most common respiratory diseases in the world and affects children to a greater degree than adults.

However, athletes who are plagued by asthma are a valid concern for their coaches. This article will aim to dispel some of the common misconceptions of working with athletes with asthma and give an overview of exercise-induced bronchoconstriction in athletes with and without asthma.

Before there were medications available to control asthma well, exercise was thought of as potentially dangerous for people plagued by asthma. In the 1970’s and 80’s there were in fact not an insignificant number of hospitalizations and even deaths attributable to severe asthma exacerbations associated with high intensity or prolonged exertion.

Since that time, there have been significant advances in the treatment of asthma. Now, it is well understood that not only does exercise not pose a risk to people with asthma but in fact, it can significantly reduce the severity of the disease and improve the overall quality of life of those who suffer from it.

Several large studies have shown that people with asthma who participate in regular aerobic exercise have improved overall fitness, better lung mechanics and as a result, improved overall quality of life when compared to those who do not exercise. Exercise is now recommended as one of the mainstays of treatment in managing the long-term effects of asthma.

Myth: People with asthma have lower performance ceilings than those without asthma.

While there is some truth to this notion for athletes who don’t control their asthma well, the vast majority of people who have asthma, control the disease well, especially by the time they reach adulthood. Asthma is principally a disease that affects the smaller airways of the lungs and this is why it is so much worse in children. In smaller lungs, airways are particularly small and any degree of obstruction has a much larger impact. When a child goes through puberty and then adulthood, their lungs grow with them. Therefore the impact on the small airways becomes less significant. Many people even outgrow the disease altogether. For others, the disease persists, but to a reduced degree and in almost all cases, it can be managed with medications to limit the frequency and severity of flare-ups.

Consequently, the pulmonary function and overall aerobic performance of many people with asthma can be as good as their non-asthmatic peers.

Myth: Training regimens for people with asthma need to be different than those for non-asthmatic athletes

For the most part, an athlete with asthma can be prescribed the same training program as a non-asthmatic athlete. No accommodation needs to be made for training volume, intensity nor workout type. That being said, individualized consideration should be given to the athlete with poorly controlled asthma or for the athlete with exercise-induced bronchospasm (see below) but aside from that, athletes with asthma need not have a distinct program.

EIB, also known as exercise-induced asthma, is a condition wherein an individual with or without underlying asthma develops the signs and symptoms of asthma soon after the initiation of exercise. EIB is seen more frequently in people who have underlying asthma, however, it is not a prerequisite. While the symptoms of EIB tend not to be as severe as a full-fledged asthma attack, they can impair performance and require medical intervention.

The pathophysiology of EIB is not yet fully understood but researchers believe that it is multifactorial. During exercise, there is a shift of breathing from principally through the nose to through the mouth. This allows drier air into the lungs which dehydrates the mucosa of the smaller airways and results in the productions of several inflammatory mediators that cause bronchoconstriction. Another consequence of mouth breathing is the loss of filtering that usually happens in the nose. As a result, allergens and irritative dust particles gain entry to the small airways and stimulate an additional response all of which results in EIB.

EIB patients respond well to the same rescue medications used for asthma such as rescue inhalers. However, the time until relief can be unpredictable so it is prudent for EIB-prone athletes to work towards prevention rather than reactionary treatment.

Both asthmatic and non-asthmatic athletes will benefit from performing a proper warm-up, using measures to mitigate inhalation of dust or allergens, (e.g.; employing face masks or buffs when training in dusty environments) swimming in outdoor or well ventilated indoor pools to avoid significant chlorine exposure and refraining from training in very cold or dry environments.

While it is incumbent upon coaches and athletes to stay up-to-date on the requirements for TUE (Therapeutic Use Exemptions) to avoid any sanctions for inadvertent doping infractions, at the time of this writing, none of the medications, oral or inhaled, used for the management or rescue of asthma are banned by any anti-doping agency so long as they are used in the usual dosing regimens. The only exception for this is prednisone (steroid) that is allowed outside of competition but banned in competition. As always, athletes and coaches should consult the USADA or WADA websites for additional information as needed.

In conclusion, asthma can be a lifelong, recurring issue for many athletes but it need not restrict them from pursuing triathlon nor any other endurance activity that they may wish to partake in. As a coach, it is important to know if an athlete carries this diagnosis so that you can ensure that their condition is well controlled and can be sure that their medications do not require a TUE but aside from that, no major changes in their training or racing regimen are required.