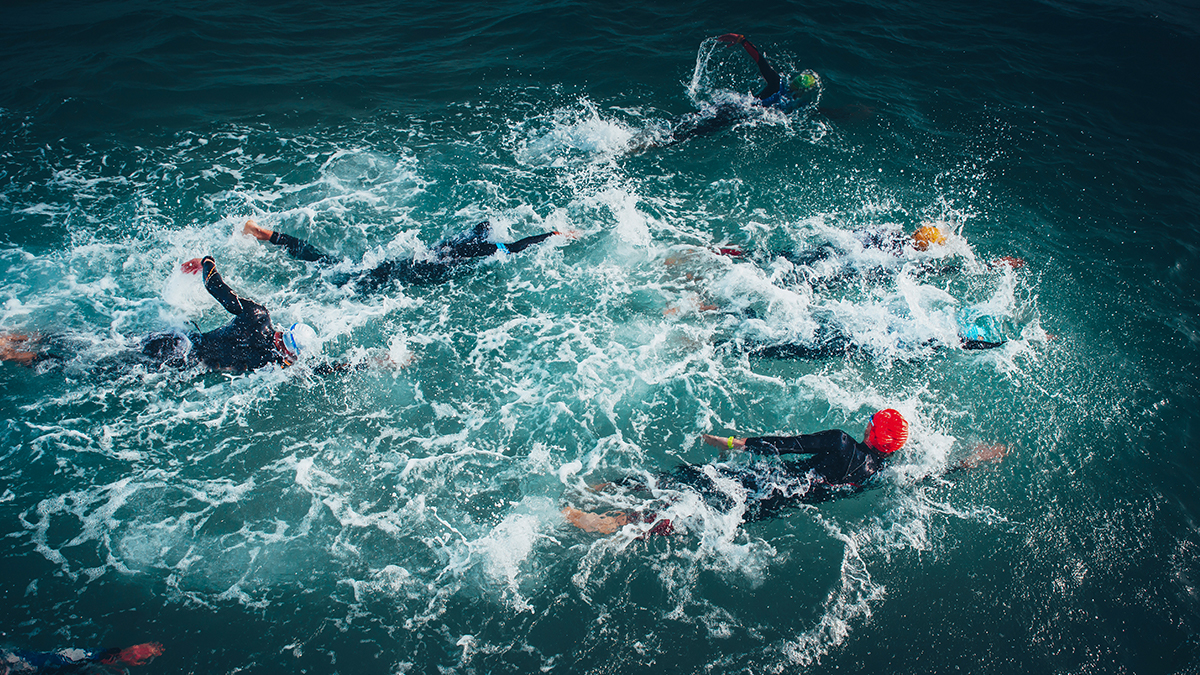 Athlete Deaths in Triathlon and How to Prevent Them

The health and emotional benefits of swimming, cycling, and running continue to far outweigh the potential risk of sudden, unexpected death.

The news in the triathlon world this season has been peppered with stories of unexpected fatalities occurring at several races across the country. Understandably, coaches may be hearing questions from alarmed athletes concerned about whether or not they too are at risk of being a victim of such a tragedy.

It’s important for a coach to acknowledge athletes’ fears, but to also place these fears in context. By staying attuned to an athlete’s overall health, a coach can often have a role in preventing any unfortunate outcomes during training or racing.

Sudden deaths during athletic events are shocking for many reasons. Victims are young, often in peak physical condition, and in many cases their deaths are the first and only sign of any underlying illness. In reality though, when researchers have looked closely at these cases, almost all had signs or symptoms of cardiac disease before the fateful day.

So rather than being a complete bolt from the blue, these athletes’ deaths were often presaged by less severe symptoms that happened in training but were not attributed to a potentially fatal underlying issue.

It has long been understood that when compared to sedentary individuals, those who participate in a regular exercise program, even one with as little as only a few hours of activity a week, have lower rates of obesity, heart disease, diabetes, and stroke (among many other benefits).

High-intensity exercise, while being overall beneficial, does carry some degree of risk—especially for certain people. While this may seem paradoxical, it can be easily explained.

Put simply, those who train and race at high intensity build their cardiovascular systems to be extremely strong and durable by virtue of placing that system under increasing amounts of stress. However, it is that very stress that can tip things over and lead to a cardiac event in susceptible individuals, occasionally resulting in unexpected death.

To illustrate this paradox we can look at the statistics of sudden cardiac death to see how being active confers protection in the long run, but may heighten danger for some on the specific day of events.

As well as having almost twice as many deaths as marathons, triathlons differ in another respect—the timing of those deaths. In marathons, deaths usually occur late in the race or just after the finish, whereas for triathlons the vast majority of deaths happen early, often in the first minutes of the race. This difference can be attributed to the presence of a swim in triathlons and all of the stresses that places on the heart right at the beginning of the race.

This is an important distinction and worth spending some time on.

Researchers in Minnesota compiled data from a thirty-year period comprising well over five million participants in triathlons. During that time period, there were 135 race-related sudden deaths, resuscitated cardiac arrests, and trauma deaths. The average age of the victims was 47 years old, and 115 (85 percent) were male, while 20 (15 percent) were female. Of the 135 deaths and cardiac arrests, two-thirds happened during the swim, 16 percent during the bike, and only 11 percent during the run segments, while six percent occurred during post-race recovery. Most of the deaths that occurred on the bike segment of races were related to traumatic injuries sustained in bicycle-vehicle collisions or in collisions with fixed objects like guard rails.

Of the deaths and cardiac arrests, almost half occurred in sprint distance races, 20 percent in Olympic-distance races, and 17 percent in half or full Ironman triathlons. Of the 68 participants whose previous race experience was known, 26 were competing in their first triathlon. Of these first-time triathletes, most (69 percent) were competing in sprint rather than intermediate- (15 percent) or long-distance (15 percent) races.

So based on this study we see a few important trends:

There are a few theories that have been put forward to explain the relative dangers of the open-water swim in triathlon. These include a spike in adrenaline in the early phase of competition that may play a role in triggering arrhythmias, particularly in athletes with underlying (but unsuspected) cardiovascular disease. Some participants may be unfamiliar with and untrained for open-water swimming and therefore may have difficulty dealing with adverse environmental conditions (such as large waves and cool water temperatures). Moreover, collisions among swimmers are routine, as anyone who has done a triathlon knows all-too-well.

This is important, because a substantial proportion of deaths occur in first-time triathletes who may panic when contact occurs with other swimmers. Finally, water rescue is logistically complex, given an athlete’s difficulty in resting or signaling for assistance if an emergency situation arises.

A final hypothesis, and one that has begun to attract more attention from medical researchers, is the concept of swimming-induced pulmonary edema as a possible precipitant for sudden unexpected deaths during the swim. Pulmonary edema is simply a displacement of fluid from the blood vessels into the breathing space of the lungs. When the lungs become full of fluid they cannot effectively participate in gas exchange and so a person rapidly becomes very ill and in serious risk of death.

Water immersion causes blood redistribution from the periphery to the heart and pulmonary vessels, causing an increase in central blood volume and pressure in the pulmonary vessels. This can be extreme and precipitate pulmonary edema in susceptible individuals, even in those without any obvious underlying medical issues. The effect is worse in colder water and especially during exertion. When swimming induced pulmonary edema comes on, it produces acute shortness of breath, cough with pink frothy sputum, and occasionally chest pain (though this tends to be seen only in older individuals). The process can happen very quickly, and if not identified and treated, it can be fatal.

However, there is no good evidence as to how often this happens or whether or not it even plays a significant role as a cause of unexpected deaths during the swim. The reason for this is because when a competitor dies during the swim, they always have fluid in their lungs on autopsy. This can be due to aspirating water after losing consciousness, developing pulmonary edema as a consequence of a primary cardiac event, or from the attempts at cardiac resuscitation. It’s simply not known how often swimming-induced pulmonary edema is a primary event.

What can be said is that this entity does exist and that it probably plays some role in these events, but how much of a role may be impossible to define.

Despite all of this, it is important for coaches to emphasize to athletes that while unexpected, sudden death is a reality in triathlon and it should not be something to preoccupy themselves with. It’s true that deaths during a triathlon are more common than in running-only events, but they are still exceedingly rare and taken as a whole, athletes are still far better off in the long run to be training and racing for these events. The health and emotional benefits of participating in this sport continue to far outweigh the potential risks.

Several researchers have attempted to screen athletes en masse to try and identify those who are at risk of unexpected cardiac deaths from any cause, and time and time again these studies have proved ineffective. The reason for this is because the main tools that we have at our disposal to do such testing on a broad scale are electrocardiograms (EKGs) and echocardiograms, or ultrasounds of the heart. Those two tests give very different kinds of complementary information (and ideally everyone would get both of them), but they are expensive, not practical, and are rarely all that helpful since they only identify certain structural abnormalities that account for a small number of these cases.

On the flip side, EKGs are very cheap and easy to obtain. They are not, however, perfect at identifying problems, and worse they frequently lead to false positives that cause more testing and patient worry—both of which end up being unnecessary.

Who Should Be Screened?

Consequently, medical societies have banded together to provide guidance for physicians on exactly who should be screened (and how), and it turns out that screening really should be reserved for those who have already exhibited some kinds of symptoms, or who have a concerning family history.

Since a retrospective study found that 29 percent of athletes who died suddenly during competition had symptoms suggestive of cardiac disease before cardiac arrest, it’s important that coaches have all their athletes carefully consider two questions:

An answer of yes to either of these should prompt immediate screening.

If they don’t answer yes, then screening is unnecessary and they really don’t need to worry too much about this happening to them.

Still, the research that has been done on this topic has been used to inform both USAT and the WTC swim start policies. This is the rationale behind the rules around allowable water temperatures for races, the elimination of mass starts from Ironman races, and the Ironman SwimSmart program that dictates how swim courses are laid out for race directors, stipulates the number and spacing of rescue boats, and changed the rules to allow for athletes to get needed support during the swim without incurring penalties.

SwimSmart also encourages athletes to not make a race their first open-water swim experience, to stay within themselves during the swim (go easy at the beginning and ease into race pace), and most importantly to be self-aware and ask for help at any sign of distress.

Despite this, sudden unexpected deaths continue to be an issue in triathlon and it’s doubtful that they can be eradicated completely. For this reason, it’s important for coaches to be alert to any signs or symptoms that their athletes may report that indicate the presence of occult cardiovascular disease, and to educate their athletes on the best approach to the swim in their first, and subsequent triathlons.