Rachel Neylan, of the German-based Abus Nutrixxion Team, was gracious enough to share her silver medal power file with us from the 2012 UCI Road World Championships.

The UCI Road World Championships Elite Women’s Road Race took place this past Saturday, September 22 in Limburg, Netherlands. After taking the silver medal for the past five UCI Road Worlds, Marianne Vos (Netherlands) was on a mission to claim the rainbow jersey this year. The Elite women completed 128 km (79.5 miles) in eight 16-km laps, with 2 climbs on each lap. Vos crossed the line alone after launching a vicious attack on the final ascent of the Cauberg. Rachel Neylan (Australia) and Elisa Longo Borghini (Italy) finished 2nd and 3rd, respectively.

Neylan, of the German-based Abus Nutrixxion Team, was gracious enough to share her silver medal power file with us. We asked TrainingPeaks Customer Education Specialist Shawn Heidgen, a former pro cyclist and coach herself, to pull out the key moments during the race that solidified Neylan’s spot on the podium.

About halfway through the race on lap 4 of 8, Neylan made what would become the winning break of the day on the climbs, and successfully shattered the field. As Neylan worked to establish the break, she set her 5-minute and 12-minute Peak Power values of the day of 280W (5.4 w/kg) and 240W (4.6w/kg), respectively.” 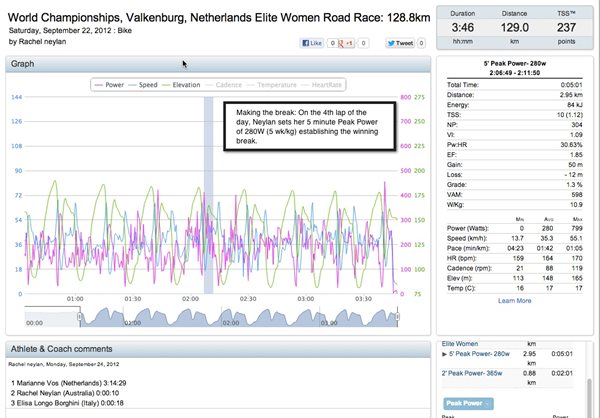 The Tale of Two Halves

This was due in part to Vos’ efforts to take the win. During the 6th lap, Vos decided to make her move and bridged up to the leaders (including Neylan). She attacked again on the 7th climb up the Cauberg, dropping members of the breakaway and forcing Neylan and Longo Borghini to surge as well in order to stay with the group. After that, Vos and Anna Van der Breggen (Netherlands) took turns pulling aggressively at the front despite a two-minute lead over the peloton, clearly with the intent of wearing down their competitors more so than building up their lead.”

“It was the 8th and final climb up the Cauberg. Vos had launched a brutal attack going for the win, and Neylan was the only rider who could respond, with her 60-second Peak Power of the day after more than 3 hours of hard racing. This effort of 454W (8.7 w/kg), where Neylan averaged 26.3 kph (16.3 mph) on a 2.9% grade, solidified her Silver Medal. She crossed the line 10 seconds after Vos and a healthy eight seconds before third place Longo Borghini.” 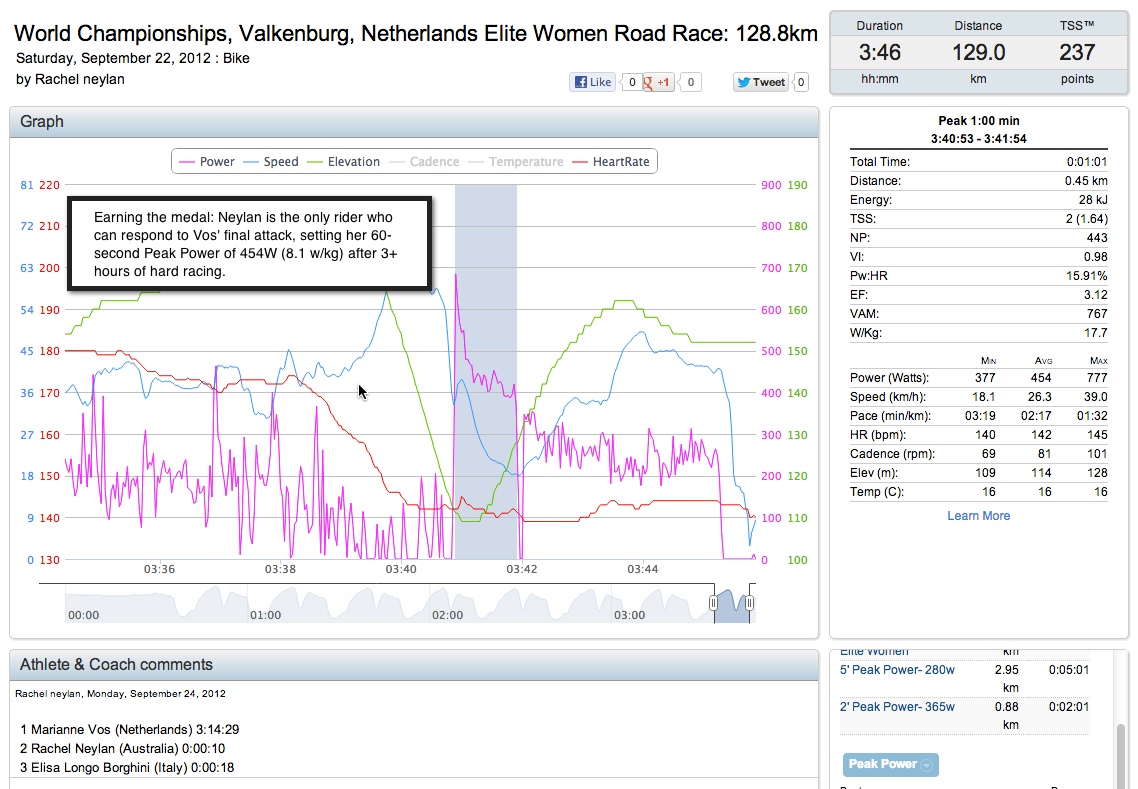 About Shawn Heidgen
Shawn'Heidgen has been involved in cycling for over 20 years. She raced professionally for three years during which she completed 2 Giro D'Italia Donne (Women's Tour of Italy ) and competed on the National Race Calendar circuit. 'Shawn'has also coached cyclists of all abilities for many years, and has led and directed training camps all over the world. Learn more about Shawn on alpcycles.wordpress.com, her coaching partnership with NCC Criterium Champion Alison Powers.
#CYCLING#DATA-ANALYSIS#PERFORMANCE