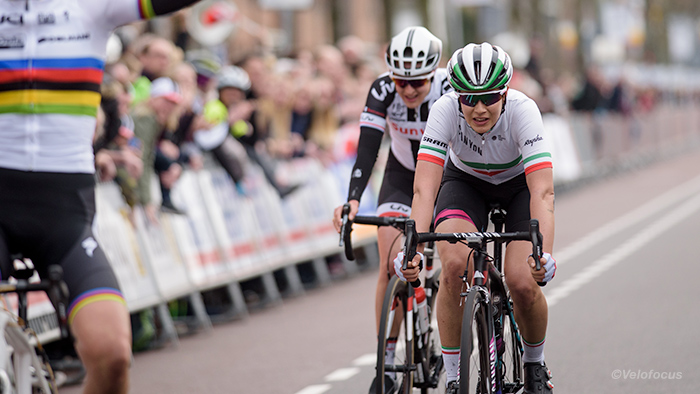 Canyon SRAM Racing’s Elena Cecchini took a gamble in the final 10K of the race that paid off. Here’s a look at what she, her coach and her data can tell us about how it all went down.

CANYON//SRAM Racing’s Elena Cecchini led an attack with three other riders in the final 10K of the Ronde van Drenthe—pushing upward of 800W during the final seconds of the race—in order to finish second on the podium after a long, hectic and fast race in the Netherlands.

The Ronde van Drenthe marked the second race in the 2017 UCI Women’s WorldTour. Starting in the town of Hoogeveen, the course featured multiple cobble stretches in the beginning before taking riders on a mostly flat course punctuated by three ascents of the 300-meter “VAMberg” climb—a man-made berg with an average incline of 20 percent. After making the final climb up the VAMberg riders still have a 30K flat stretch of racing left, and as is often the case on this course, this is where many of the top finishers began to make their move.

“Beside the famous and selective VAMberg, the different cobblestone sections are often a crucial part in this race,” said CANYON//SRAM Racing coach Andreas Lang. “Riders have to fight for a good position beforehand while riding at a fast pace.” For Cecchini this meant power outputs of up to 300W during each of the seven cobblestone sections.

Cecchini played things smart during the first and second VAMberg climbs, with an average power output of 392W over 72 seconds (6.88 W/kg)  after the second ascent. During the third and final push up the VAMberg, the race was in full play and at around 113 km the top riders broke away, with Cecchini and others giving chase. “This last time up the climb caused Cecchini to have a power output of 449W over 65 seconds and a power-to-weight ratio of 7.88 W/kg,” explains Lang. “In this last and crucial part of the race Elena stayed in the front group of select riders, and by doing so she was able to follow all the attacks and keep all the chances open for herself and her team.”

Cecchini settled in near the front with fellow teammate Hannah Barnes. “I told Hannah that we needed to focus on some specific girls, because we couldn’t follow every attack,” says Cecchini. “And then I suddenly just said to myself, ‘Okay Elena, let’s try something.’”

With 10 km to go in the race, Elena attacked, bringing with her three other riders (Amalie Dideriksen, Longo Borghini, Lucinda Brand), all of whom would continue up at the front and eventually battle for the win. Their final sprint for the podium would last 47 seconds, with Cecchini’s essential effort for second place behind Dideriksen lasting 22 seconds with 502W average power, a heart rate of 193 bpm and a max power of an astonishing 869W.

Cecchini is happy with how things shook out at the very end. “It was a good combination,” says Cecchini. “I think I made the right move in the final moments of the race, Dideriksen was just faster than me.”

About Susan Legacki
Susan Grant Legacki is the Content Director at TrainingPeaks. The founding editor of LAVA Magazine and a former editor at Triathlete Magazine and Inside Triathlon, Susan is an IRONMAN finisher, Boston Marathon qualifier, USAT Level 1 Triathlon Coach and certified Pilates instructor. When she's not editing or writing copy about endurance sports, you can usually find her training for them around Boulder, Colo.
#CYCLING#ROAD