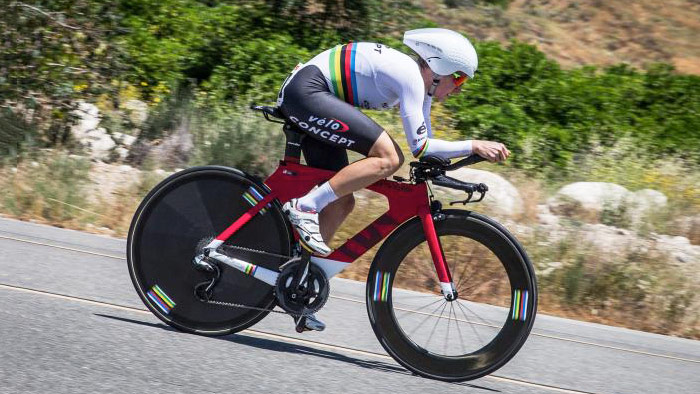 The 2017 Women’s Redlands Classic is complete. After five stages, more than nine hours and 30 minutes of racing, and four days in the yellow jersey, TrainingPeaks WKO4 ambassador Amber Neben placed second overall in her 12th time at this event.

Amber had her hands full, as she was up against a strong UnitedHealthcare (UHC) team that placed three in the top six after the opening time trial. However, she held onto the yellow jersey until the last day, when UHC executed superb team tactics, including strong rides by Katie Hall and Ruth Winder to take the win, bumping Amber to second overall.

Let’s take a look at each of the stages of the event through the lens of TrainingPeaks WKO4 software, using Amber’s data collected with a Quarq DZero. Additionally, we have Amber’s post-activity comments to me (her coach), which give a unique perspective into the mind of a champion rider.

The time trial was moved to day one this year. It was a 7.1-mile classic out-and-back course climbing more than 500 feet on the way out and descending on the way back. Amber was fastest on this day at 16:25, capturing the yellow jersey, but as we look at the data, we can see that a better equipment selection could have extended her early lead even more.

Let’s begin by comparing her “out”  versus her “back” with a custom quadrant analysis overlaying the out and back segments separately.

On the uphill “out” segment, Amber averaged 286 watts (5.6 w/kg). She climbed the 500-plus feet at 22.2 mph with an average cadence of 94 rpm, setting a strong pace. Through this quadrant analysis, we can see that she spent 61.7 percent of her time pedaling in the “high force, high cadence” quadrant, which is her prefered way to make power.

Once she hit the turnaround, there was a dramatic change in both her power and pedaling style; her power dropped to 246 watts (4.8 w/kg) while her average speed increased to 31.4 mph with an average cadence of 94 rpm.

At first glance, this might seem to be the result of fatigue or the downhill segment, but the quadrant analysis lets us look a little deeper; note the significant decline in time spent pedaling in the “high cadence, high force” quadrant (61.7 percent out versus 24.4 percent back) and the significant increase in the “high cadence, low force” quadrant (25.9 percent out vs. 53.8 percent back). With no change in average cadence, this means there was a significant reduction in the force (torque) of her pedaling stroke. Why? Amber was under geared for the the effort. Due to some mechanical and equipment issues, she had to run a top gear of 53 x 11, and this cost her time. The data suggests that running her normal 54 x 11 or maybe even a 55 x 11 would have allowed her to apply more force on the back leg of this course.

“Opted for more unstructured road warm up. It was hot, and there were lots of misc. extra things going on with D2B stuff – all good but also distractions.  It was better to get away and give up structure. Race was good for first run of season. Felt alright. Maybe a bit too rested still.  Rhythm was good, hard going out. I was able to stay on the power.  Turn around was casual.  I didn’t think I was on the power enough in the first few minutes after the turn around. Not enough gears. I stayed in it mentally, though. Hit the hard sections where I could coming back. Cool to win in rainbows.”

Stage 2 was a four-lap circuit race finishing on the back side of the classic Oak Glen Climb. Amber’s focus for the day was to defend the jersey during the early part of the race, which featured some significant climbing, while trying to save as much energy as possible for the final climb. With a young composite team, Amber was forced to do more work than she hoped, but she arrived at the bottom of the finishing climb with the lead pack in good position, and then she hit the gas pedal. Only UHC’s Katie Hall could counter, and they moved away from the field to finish 1-2, with Hall putting in a late surge to gain some time and win the stage.

On the final climb, Amber generated 266 watts (5.1 w/kg) for just under 30 minutes, but what is remarkable is that this was after she burned a whopping 2,709 kjs of work maintaining position with the lead group. A professional cyclist’s ability to resist fatigue and put out high-power numbers after significant work is a key differentiator from everyday cyclists.

We can also see that for this type of climb, Amber slightly dropped her cadence but pedaled with a good bit more force than in the time trial, hitting 46.2 percent of the time pedaling in the “high force, low cadence” (low cadence for her, anyway) quadrant.

“HOT again. 90+ all day. Girls are raw, but they fought hard and helped where they could!  I helped the last 2 laps with lots of tempo work to control break.  More on the last lap leading into the big climb.  Took a brief breath across Bryant, but then hit it hard once the road went up.  Eventually, there were 3 on my wheel with 2 UHC. Then just Katie and I. She sat. I knew she’d launch after the little downhill about 2k out, but I needed to stay on the gas since Ruth was behind. Uggg. I think I did a lot of work today. Still in yellow. How about that?”

Stage 3 opened with Amber holding the yellow jersey by 22 seconds. This circuit race is shorter but features 20 laps, each heading over the short but steep baseline climb. This stage would be a hard defense day, as the fast course with power climbs would require a lot of effort to maintain position and cover attacks from other teams.

One of the unique ways to review these types of efforts is to utilize WKO4’s VO2max model to view the intensity of the effort as a percentage of power at VO2max. Take a look at Amber’s effort in the chart below. We can see the percentage of power at VO2max following the elevation line; this is from each attack or harder effort on each climb (some harder than others).

When we add up the time spent with power at VO2max, we have a whopping 10:45 over 95 percent of her maximum VO2max capability. This shows the depth of her aerobic fitness and natural abilities, and it gives us insight into not only how she produced the high Normalized Power needed to defend the yellow jersey in this stage, but also the cost of the effort. Spending over 10 minutes at maximal VO2max effort is very difficult.

“More teams interested in stage today. Was good to be able to sit more and follow the red jersey. She was aggressive as expected. Good legs and could follow. Glad everyone stayed safe today. I had a teammate crash hard on that stage a couple years ago. / Post Race Recovery – delayed some for USADA control and interview with Dalton. Also, went to a park to do interview with Abby this afternoon.”

The stage 4 crit again saw Amber defending yellow. The high pace and multiple team attacks actually made this an easier day (though still not easy) for her than the previous day’s circuit efforts. She was able to stay at the front and maintain great position, conserving some energy. Take a look at the chart below for some insight on how she did it.

Amber grew up in Southern California racing a lot of crits, and even though crits aren’t her specialty, she knows how to ride them efficiently. Look at her average power by cadence bins. When she steps up her power, she does it by increasing her cadence, not by force or grinding. This allows her to be agile and nimble in the pack, responding to moves and surges without getting caught in or grinding big gears. This is a skill that takes years to build, and it’s one of the keys to great crit racing.

“My favorite. Ha. Tried to stay out of trouble and be as smooth as possible.  Solid race.  VD/DNA rider was super strong today.  // post race = delayed recovery again = yeah = lots going on.  Had The Dare To Be Project Kids Adaptive race right after our race. It was cool. I got to introduce the kids and my teammates to the crowd. Then the kids hammered a lap. We helped/cheered. All went super smooth. Good to pull that off!”

Amber went into the final day with a 22-second lead. Four days of hard work defending the jersey was adding up. She already had 1,167 TSS points for the full week (including Monday and Tuesday’s pre-race workouts) and 10,768 kjs of work burned—a significant amount of effort. UHC executed excellent tactics on the final day, forcing Amber to work hard early and defend. UHC launched well-planned, late attacks, ultimately leading to Ruth Winder taking the win and Amber earning a strong second place.

The cumulative fatigue from the week significantly affected Amber’s ability to go into the red to counter and chase, which is visualized on this power heat map chart. We can see how Amber had the ability to go deep in the red to cover moves for about two-thirds of the race, but finally she could no longer go that deep to counter Winder’s strong move.

“Did some easy riding to get warmed up. This stage normally has a threshold “neutral” effort before the green light to race, so I wanted to be ready.  However, today they drove pretty easy. Not sure what was up. Racing was as I thought it would be … UHC used their full team. Ruth and Katie rode very well. I was alone all day.  If anyone thinks cycling is not a team sport, they are wrong!  I held jersey longer than I thought but still disappointed to get this close and not be able to hold on for 4th win there.  Generally, though – really good.  Put it in the bank.  WHOA. I am empty after this one. PS I am going to donate 100% of prize money to Dare to Be. Probably about $1,500.”

The 2017 Women’s Redlands Classic was a very exciting race with demonstrations of excellence, both in team strategy and individual strength. Losing the jersey on the last day is always disappointing, but Amber was pleased with her efforts and the progress of her training.

Both the stage numbers and the summary data demonstrate how hard Amber had to work to try to defend the jersey racing on a composite team.  A rough comparison of previous numbers and similar stage races suggest this was 10 to 15-percent harder (total TSS and Work) than when fully supported by her team.

Interested in getting powerful workout analytics based on your own unique physiology? Try out WKO4 now with this free 14-day trial.

About Tim Cusick
Tim Cusick is the TrainingPeaks WKO4 Product Development Leader, specializing in data analytics and performance metrics for endurance athletes. In addition to his role with TrainingPeaks, Tim is a USAC coach with over 10 years experience working with both road and mountain bike professionals around the world. You can reach Tim for comments at tim@wko4.com. To learn more about TrainingPeaks and WKO4 visit us at TrainingPeaks.com.
#CYCLING#DATA-ANALYSIS#PERFORMANCE#ROAD